SEOUL, June 7 (Yonhap) -- Three BTS songs will hit the playlist of the American space agency's next journey to the moon as the agency is planning to make another lunar landing by 2024, the agency's SNS feeds have shown.

In a Twitter feed Tuesday, the Johnson Space Center of the National Aeronautics and Space Administration (NASA) said three BTS songs -- "Moonchild," "Mikrokosmos" and "134340" -- will be added to the playlist for the planned lunar journey.

"Wow, there are a lot of BTS & RM fans! Thanks for the submissions -- we'll add 'Mooonchild,' 'Mikrokosmos' & '134340' to the playlist!" the Twitter message said, with a photo of a NASA employee in a space suit.

The message came one day after the NASA training center invited people to recommend songs fit for the lunar journey in celebration of this year's 50th anniversary of the Apollo human spaceflight program.

Astronauts Neil Armstrong and Buzz Aldrin reached the moon in a command and service module, and walked on the lunar surface on July 20, 1969, on the Apollo mission.

The invitation seems to have moved a lot of BTS fans to pitch the band's music for the proposed playlist. 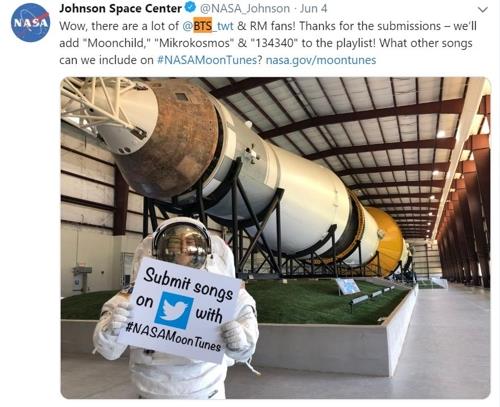 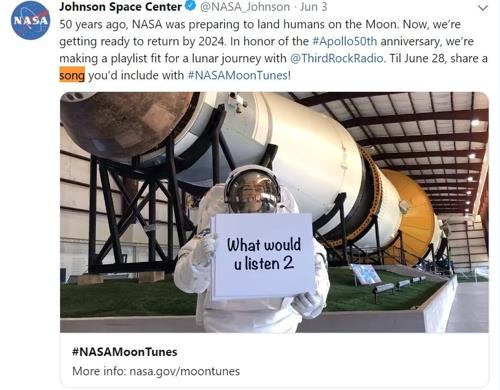 "Moonchild" is one of the tracks off BTS leader RM's latest mixtape "mono.," released in October last year. The song drew on the image of the moon, with its lyrics "We're born in the moonlight ain't no fantasy" sounding fit for NASA's lunar exploration journey.

"Mikrokosmos" is a track on the K-pop band's latest album "Map of the Soul: Persona," while the other BTS song, "134340," is off "Love Yourself: Tear," dropped last year.

134340 is the numeric code for the dwarf planet given to what used to be Pluto. Originally considered to be the ninth planet from the Sun, the dwarf planet was first called Pluto, but the International Astronomical Union reclassified it as a dwarf planet in 2006 and gave it the code.

BTS songs to hit playlist of NASA's next lunar journey

BTS songs to hit playlist of NASA's next lunar journey