SEOUL, June 7 (Yonhap) -- The leader of a militant labor umbrella labor group voluntarily appeared before police on Friday to be questioned about allegations of organizing violent protests at the National Assembly in Seoul this spring.

Kim Myeong-hwan, chairman of the Korean Confederation of Trade Union (KCTU), arrived at the Yeongdungpo Police Station in southern Seoul in the morning before being grilled about his responsibility for allegedly masterminding violent illegal acts during KCTU members' protest rallies in front of the assembly compound in March and April.

Between late March and early April, the KCTU members are accused of knocking down parts of the fence surrounding the National Assembly in Yeouido and attempting to force their way into its compound illegally to block the passage of labor bills calling for extending statutory flextime to six months from three to minimize side effects of the government's mandatory 52-hour workweek policy. 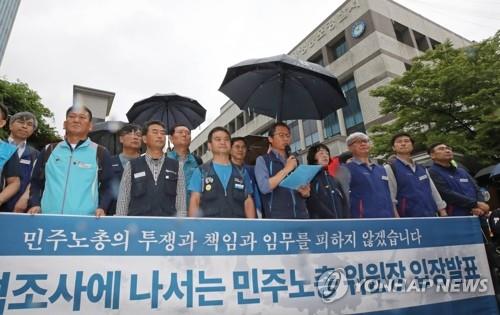 The KCTU protesters were also accused of assaulting police officers and injuring six of them during a clash on April 3.

Kim is accused of masterminding the violent and illegal protests at the National Assembly. Kim was briefly detained by police after forcing his way into the assembly premises that day.

Police suspect that Kim and 73 others were involved in illegal acts during their protest rallies in March and April. Three of them were put under arrest on May 30.

Before entering the police station, Kim said in a news conference that the KCTU won't avoid its social responsibility and obligation to struggle.

"The KCTU's struggle in March and April was inevitable to help Korean society trapped in a vicious cycle of long working hours and low wages," Kim said, vowing to take full responsibility for all struggles by the KCTU.