SEOUL, June 7 (Yonhap) -- South Korean shipbuilders may not meet their annual order targets in 2019, industry observers said Friday, as global shipbuilding orders are falling in the face of the escalating U.S.-China trade dispute.

South Korea's three major shipbuilders -- Hyundai Heavy Industries, Samsung Heavy Industries and Daewoo Shipbuilding & Marine Engineering -- bagged a combined US$7.53 billion worth of orders as of end-May, which meets only 23.5 percent of their annual order target of $32 billion, according to industry data.

Top player Hyundai Heavy, including its small affiliates Hyundai Samho Heavy Industries and Hyundai Mipo Dockyard, has so far bagged $2.5 billion worth of orders, achieving only 15.7 percent of its annual target of $15.9 billion. 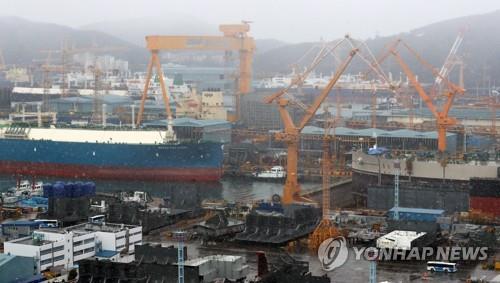 Industry observers said that it isn't likely that local shipbuilders can pick up the pace as global shippers are lumbering in placing orders for new vessels amid global trade woes.

According to London-based Clarkson Research Services Ltd., the world's leading provider of data for the shipping and shipbuilding industries, global shipbuilding orders in the first four months of the year amounted to 7.69 million compensated gross tons (CGTs), a 36.8 percent drop compared with the same period in 2018.

In April alone, global shipbuilding orders totaled 1.21 million CGTs, which was more than halved from 2.88 million CGTs in March.

South Korean shipyards are also struggling to get ahead of their Chinese rivals.

In the first four months of the year, South Korean shipyards bagged orders totaling 2.02 million CGTs or 45 vessels, to finish second in winning new orders. China topped the list with 3.44 million CGTs, or 140 ships, according to Clarkson data. 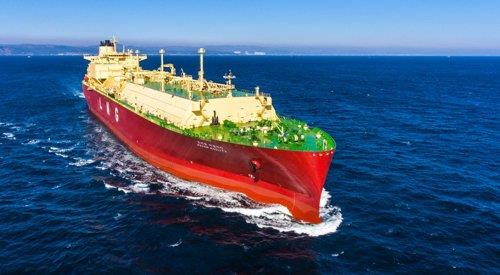 While Chinese shipbuilders rely on making low-end ships, such as bulk carriers, South Korean shipyards have been focusing on building high-end ones, such as liquefied natural gas (LNG) carriers.

South Korean shipbuilders originally expected orders for some 100 LNG carriers would be placed this year on the back of gas development projects from Qatar, Mozambique and Russia.

However, with rising concerns over global economy uncertainties, industry observers are also trimming the outlook for LNG vessel orders.

Last year, Clarkson expected that 69 LNG shipbuilding orders would be issued in 2019, but that projection has now declined to 55.

But some analysts said that the outlook is not too gloomy for South Korean shipbuilders for the long haul, saying if LNG vessel orders do not come in this year, they will next year.

"It's not that South Korean companies have lost competitiveness in shipbuilding," said Kim Hyun, an analyst at Meritz Securities Co. "I see the recent slump as temporarily. South Korean builders may lag behind Chinese players in terms of order amounts, but quality-wise, they are firmly No. 1 in LNG vessels."

Industry insiders said it is important for the local shipbuilders to maintain their productivity before winning orders. Since last month, labor unions at Hyundai Heavy and Daewoo Shipbuilding have been launching strikes to oppose the planned merger between the two companies.

"If industrial actions from the union affect the delivery of our ships, it'll heavily damage our reputation," a Hyundai Heavy spokesman said. "Regardless, we'll keep working hard to win orders."