SEOUL, June 7 (Yonhap) -- The outgoing deputy commander of the United Nations Command (UNC) received an honorary Korean name from a pro-alliance group here in recognition of his dedicated service, the command has said.

Lt. Gen. Wayne Eyre was given the Korean name "Ye Young-soo" from the Republic of Korea-U.S. Alliance Friendship Association on Tuesday, the command said in a Facebook posting.

The Korean naming ceremony is "to express gratitude and appreciation for great service by U.S. military leaders in Korea" as a sign of respect for their commitment to the stronger bilateral alliance and friendship, according to the command.

Eyre is the first Canadian to receive the honor, as he is UNC's first non-American deputy commander.

"We do everything we can to help establish a lasting peace on the peninsula, by helping to implement agreements and give diplomacy the space to work," Eyre said.

The UNC didn't elaborate on the meaning of his Korean name, but the family name "Ye" sounds similar to his surname and means "sharp," and the given name "Young-soo" can be roughly translated as "glorious defense."

Eyre took office in July 2018 as the UNC's first non-American deputy commander. He is to be replaced by R. Adm. Stuart Mayer from Australia in the coming weeks. 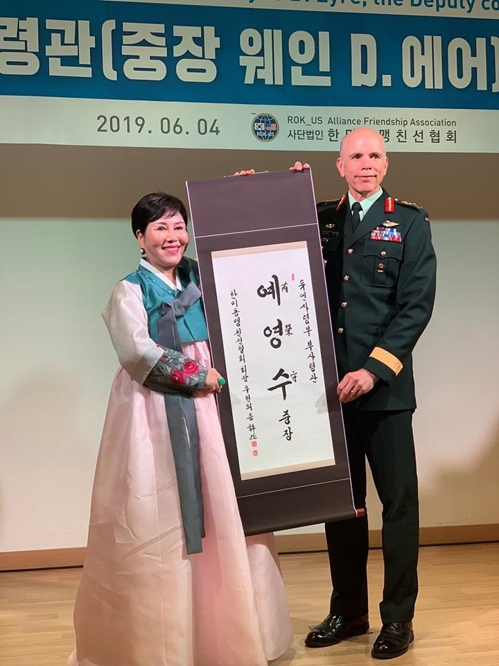