The ticket purchases by Yonhap News Agency and other institutions were announced during a purchase certificate delivery ceremony held at Gwangju City Hall.

Lee expressed gratitude to Yonhap for its ticket purchase and asked for concerted efforts to promote the global swimming event among the public. 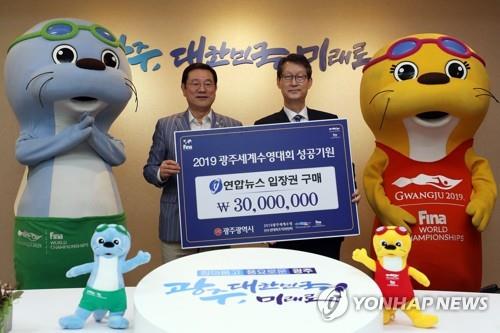 The biennial FINA World Championships will be held in Gwangju, 330 kilometers south of Seoul, and Yeosu, South Jeolla Province, from July 12-28. FINA is the French abbreviation of the International Swimming Federation. It will be the 18th edition of the world swimming body's signature event.

Cho said Yonhap bought tickets for the FINA championships because it is not only an event for the city of Gwangju but also a global festival.

"Yonhap News will actively promote the Gwangju swimming championships in real time through its domestic and overseas networks," Cho said.

Meanwhile, the organizing committee of the 2019 FINA World Championships said it has so far sold tickets valued at 3.87 billion won, attaining 51 percent of its sales goal of 7.5 billion won.