WASHINGTON, June 7 (Yonhap) -- The top nuclear negotiators of South Korea and the United States will jointly address a public forum in Washington later this month, organizers said Friday, amid a protracted stalemate in talks with North Korea.

"This day-long conference will explore the current state of the United States and Republic of Korea's ongoing negotiations with North Korea and the broader strategic picture developing in the Indo-Pacific," it said.

The think tank also noted that it will be Lee's first public speech in the U.S and the first time the two envoys speak on the same stage.

Next week marks one year since North Korean leader Kim Jong-un and U.S. President Donald Trump held their historic first summit in Singapore and agreed to work toward complete denuclearization of the Korean Peninsula in exchange for security guarantees for Pyongyang.

Implementation of the deal has stalled due to differences over the scope of North Korea's denuclearization and sanctions relief from the U.S.

Negotiations between Washington and Pyongyang have effectively been suspended since the second summit in February in Vietnam ended without a deal.

The forum will feature panel discussions involving South Korean and U.S. lawmakers, including Rep. Hong Ihk-pyo of the ruling Democratic Party and Rep. Ami Bera (D-CA), co-chair of the congressional caucus on Korea.

Moon and Trump are set to hold talks in Seoul at the end of this month. 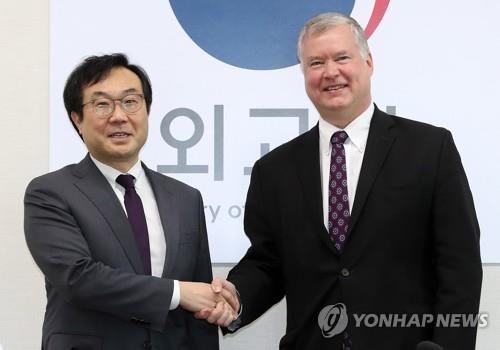