SEOUL, June 9 (Yonhap) -- A body, believed to be of a United Nations soldier who fought in the 1950-53 Korean War, has been found during excavation work inside the Demilitarized Zone (DMZ) on the border with North Korea, Seoul's defense ministry said Sunday.

Bone fragments were found on Wednesday during an excavation and demining project on Arrowhead Ridge, a former battle site inside the DMZ that separates the two Koreas, the ministry said.

The ministry said it marks the first time that the remains of a U.N. soldier have been found.

During the war, the U.S. led the 21-nation Allied Forces to help South Korea repel the Chinese-backed communist troops invading from the North. More than 40,000 U.N. troops, most of them from the U.S., were killed in action during the conflict. China has said 116,000 of its troops died.

A total of four battles took place at Arrowhead Ridge, with some 100 U.N. troops believed to have been killed at the site.

But the North has remained unresponsive to calls to jointly carry out the project as agreed, leaving the South Korean military to conduct it alone. 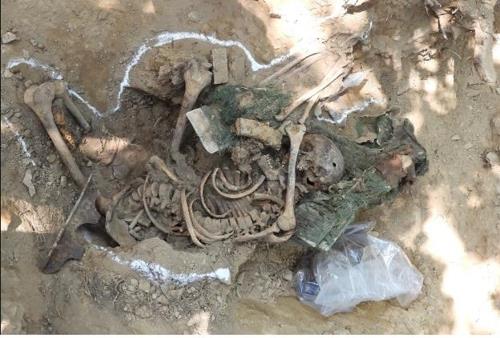