HELSINKI, June 10 (Yonhap) -- South Korean President Moon Jae-in will hold bilateral talks with his Finnish counterpart, Sauli Niinisto, on Monday, commencing another round of his summit diplomacy to harden international support for the Korea peace process and broaden partnerships on Seoul's search for future growth engines.

Moon arrived in Helsinki on Sunday for a three-day state visit, the first leg of his weeklong regional tour that will also take him to Norway and Sweden.

His choice of the Finnish capital as the initial destination is highly symbolic.

Finland is to assume the six-month rotating presidency of the European Union on July 1. It is also known for having led the Helsinki process to reduce tensions between the Soviet and Western blocs during the Cold War era.

Moon hopes to secure more support abroad for his peace vision prior to a series of meetings with the presidents of China and the United States on the occasion of the Group of 20 summit to be held in Osaka, Japan, at the end of this month. 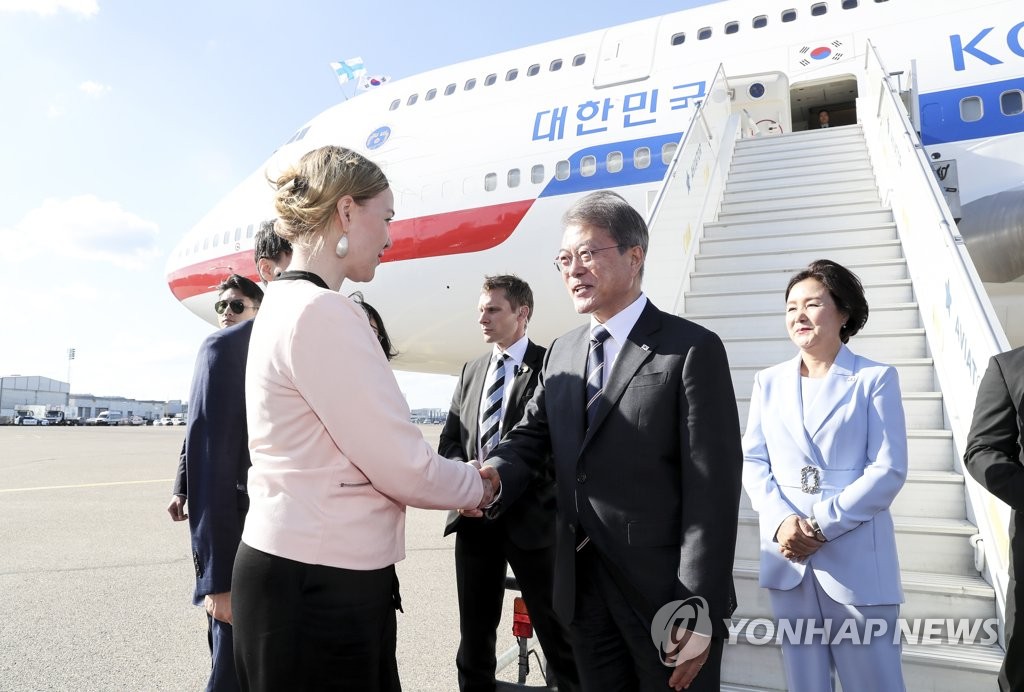 Also high on the summit agenda will be ways to deepen bilateral cooperation in connection with the fourth industrial revolution.

Finland, once called the country of Nokia, has emerged as a mecca for tech-savvy startups.

"Finland has become a leading country in the startup sector, where more than 4,000 innovative startups are created every year," Yoon Jong-won, senior secretary to Moon for economic affairs, said.

The president's trip to Finland is expected to help South Korea's startups and small and medium-sized enterprises tap into the European market, he added.

On his Finland trip, Moon is being accompanied by dozens of CEOs and other representatives from South Korea's major startups.

During the trip, South Korea and Finland plan to sign a related memorandum of understanding.

He's also scheduled to visit the campus and research area of Otaniemi, a suburb of Helsinki, which is known as the largest hub of high technology, innovation and business in Northern Europe.