The average delinquency ratio of 45 P2P lending firms stood at 8.5 percent in April, marking the highest figure since an industry group began compiling related data in June 2016, according to the Korea P2P Finance Association.

P2P lending refers to a new type of loan extended to individuals or businesses through social network services and the Internet, covering a wide range of services, including loans to startups and self-employed businessmen.

The rise in delinquencies at P2P firms came as their lending to property development projects turned sour over the government's regulations to cool home prices. 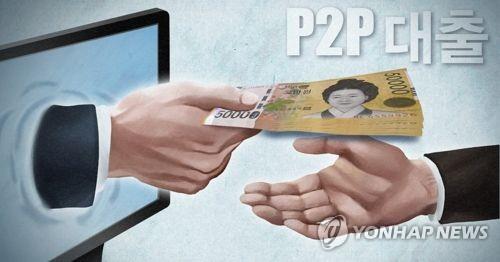 Of the 45 P2P firms, eight firms saw their delinquency ratio rise above 20 percent, according to the data.

Currently, P2P lending firms are largely unregulated. Financial authorities have said they would exercise oversight of such businesses if regulatory bills are approved.

Lawmakers have proposed five bills to regulate P2P lending firms, but the bills have gained little momentum in the National Assembly.

With the bills pending, financial authorities have been struggling to tackle abusive and deceptive P2P lending practices.

Officials at the Financial Services Commission said disputes between investors and P2P lending firms were on the rise and some P2P firms were raising funds illegally.

Lax regulation on entry into the P2P sector is one of the reasons for such problems, officials said.