SEOUL, June 10 (Yonhap) -- Ruling party, government and presidential officials called for the swift normalization of the National Assembly on Monday, stressing that a bill mandating extra fiscal spending should be passed no later than July.

The National Assembly has been idle for about two months as rival parties have bickered over a set of political issues, suspending the opening of an extra parliamentary session in June.

A delay in the normalization of the assembly's operation has jeopardized a 6.7 trillion-won (US$5.7 billion) supplementary budget bill and other proposals designed to help improve people's livelihoods.

Ruling party, government and presidential officials jointly denounced the main opposition Liberty Korea Party (LKP) for not cooperating in putting parliament back on track during their trilateral meeting held at the assembly.

They said partisan negotiations should kick off early this week to enable the government to carry out the supplementary spending no later than in July. 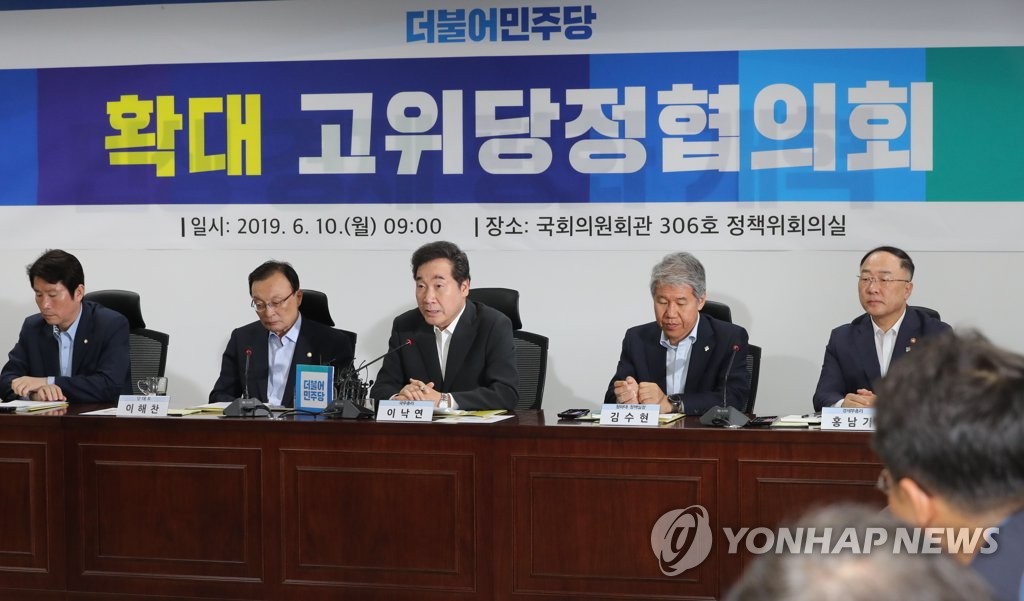 "The participants called for the LKP's swift return to the National Assembly. The finance ministry will make thorough preparations for the passage of the extra budget bill and the execution of additional fiscal spending," Rep. Hong Ihk-pyo, DP spokesman, told reporters.

The government drew up a supplementary budget in April to cope with fine dust air pollution and prop up the slowing economy in the face of growing downside risks at home and abroad.

Of the 6.7 trillion won, 2.2 trillion won was set aside for fine dust and safety controls, with the remainder allocated to boost the economy.

"Trade tension between the United States and China appears to be serious. External economic conditions seem to be worsening," Kim Soo-hyun, senior presidential secretary for policy, said at the start of the meeting.

"The government is looking at the current (economic) situation very seriously," he added.

The ruling Democratic Party (DP) is considering opening an extra session by itself after reviewing the progress for negotiations with rival parties by Monday. But it also remains cautious about its potential unilateral move as it will likely have little to gain and the LKP could unleash political criticism of the move.

The conservative LKP, meanwhile, claimed the extra budget is a politically motivated maneuver to win voters for next year's general elections.

"It is questionable whether the economy could pick up with a massive amount of taxpayers' money. (The government) is trying to be generous in spending the budget, blinded by the elections," LKP chairman Hwang Kyo-ahn said at a party meeting with senior officials.