SEOUL, June 10 (Yonhap) -- An international Red Cross organization said Monday that it has distributed thousands of posters to schools in North Korea aimed at raising the awareness of dangers of unexploded bombs, a legacy of the 1950-53 Korean War.

The International Committee of the Red Cross (ICRC) completed distribution of the posters to schools in North Korea earlier this year, according to its mission in Pyongyang. It did not specify exactly when and how many posters had been distributed.

In an interview with Yonhap News Agency in December, Bart Vermeiren, then head of the mission of the Geneva-based organization, said it would "soon" distribute posters to about 4,500 schools across the country. 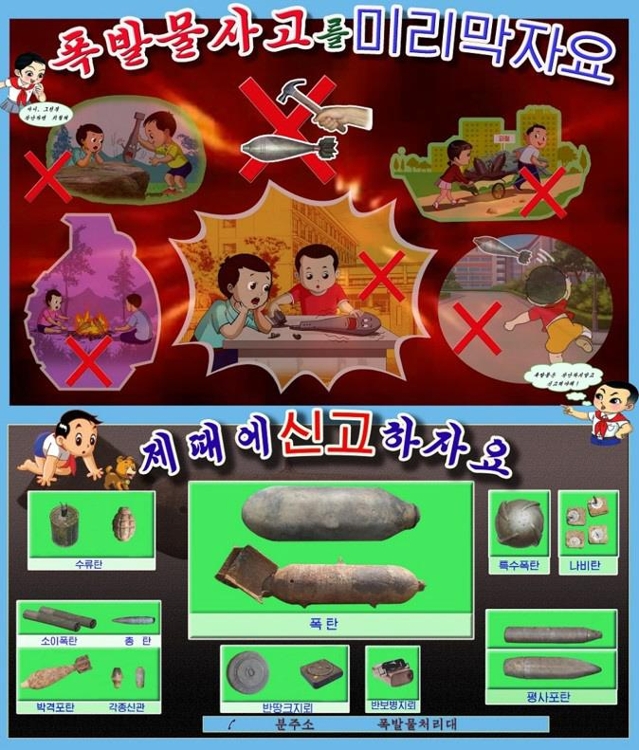 The poster provided by the ICRC shows various types of unexploded bombs that children could come across in places such as playgrounds, near their homes and camping sites. It also urges kids to report to authorities immediately if they find one, adding, "Let's prevent bomb accidents in advance."

The ICRC has been working hard to safely remove unexploded bombs dropped across the North during the Korean War. It believes that raising "risk awareness" is an effective way to reduce accidents caused by the hidden threat.

The risk appears to be more palpable in North Korea than any other region in the world. Many parts of North Korea are apparently "contaminated" by unexploded bombs left behind in the wake of the Korean War.

Thierry Ribaux, who took over as head of the Pyongyang mission late last year, told Yonhap in a written interview in March that the organization will continue to provide support for the removal of unexploded bombs in North Korea.

"We are planning to continue to offer the support to the authorities for the safe removal of unexploded ordnance from the Korean War," Ribaux said. "This is a very unique project that has been ongoing (for) several years."