By Kang Yoon-seung and Kim Sung-jin

SEOUL, June 10 (Yonhap) -- Canada's free trade deal with South Korea is one of its most successful free trade pacts, the country's trade minister says, as Canada is committed to promoting barrier-free trade around the globe while fighting protectionism.

"The free-trade agreement with South Korea has been very successful. It was our first free trade agreement in Asia, and the numbers are very positive," Canadian Trade Minister Jim Carr said during an interview with Yonhap News Agency on Monday.

The free trade agreement (FTA) went into effect in January 2015, and achieved its main objective -- a big jump in bilateral trade.

The bilateral trade volume came to US$11.5 billion last year, up a whopping 34 percent from 2015, according to data from the Korea Customs Service.

Over the period, South Korea's exports to Canada jumped 24 percent at $5.7 billion, with imports soaring 45 percent at $5.8 billion, the data showed.

"We think there is all kinds of potential to grow in the two-way trading relationship," Carr said, describing South Korea as one of Ottawa's crucial partners in its efforts to diversify the trade portfolio and cope with rising protectionism. 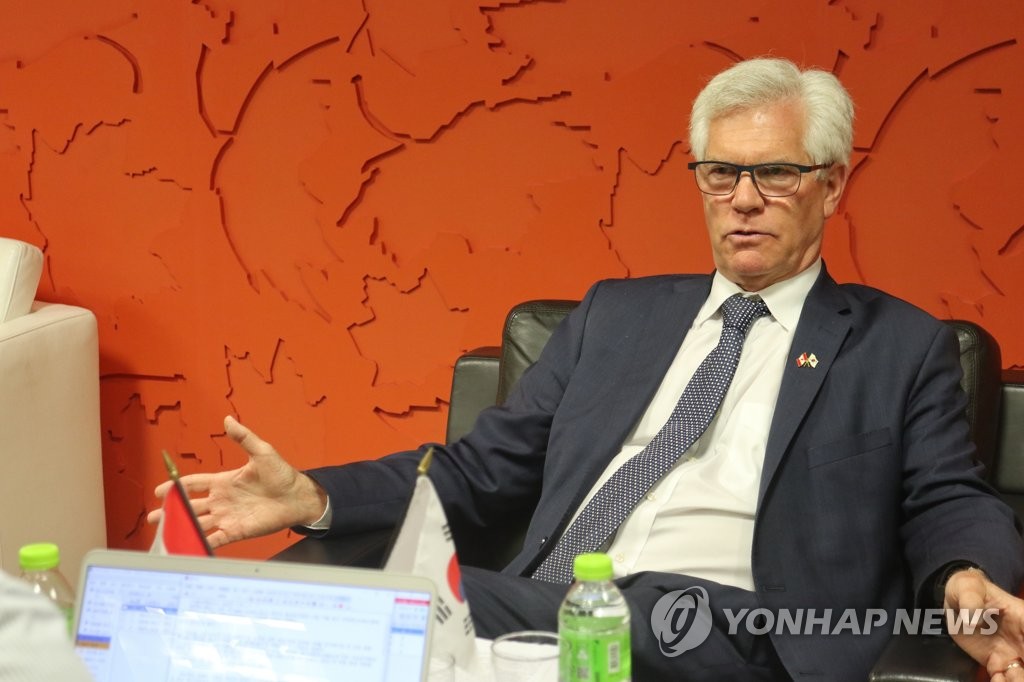 Despite the looming protectionism around the globe, Canada supports a "transparent and rules-based multilateral trading system," and believes that "open and predictable rules-based trade is the cornerstone of global commerce," his ministry said in a separate statement.

"Our policy and strategy is to reduce tariffs wherever we see them. That is our philosophy as a free-trading nation," Carr added. "We were in an unfortunate position of having to retaliate when the U.S. imposed the 232 tariffs on steel and aluminum, but as soon as the American administration dropped those tariffs, we dropped ours."

The U.S. has been moving to raise its trade barriers against China, Japan and European countries on national security grounds based on Section 232 of the country's Trade Expansion Act.

South Korea is also one of the potential targets in the auto segment, with Washington set to announce a decision later this year.

In support of free trade, Canada exempted South Korea from its safeguard measures on imported steel products in April, acknowledging that steel products imported from Asia's fourth-largest economy do not have an adverse effect on its industry.

The Canadian ministry said in a statement that its exclusion of Korea from safeguards imposed on heavy plate and stainless steel wire is consistent with the North American country's international trade commitment.

Carr also expressed hope over expanding bilateral trade between the two countries in other areas, such as artificial intelligence or energy.

"There's virtually unlimited potential and a wide variety of sectors of industries," the minister said, adding that he drives a Hyundai Motor Co. Elantra compact at home.

Although China cited food safety issues, the import ban could be retaliation for Canada's arrest of a high-ranking official of Huawei Technologies Co., a major Chinese telecom firm.

"While it may not be in the short term, I think we can expand the overall market for canola (in South Korea). It is healthy and fine cooking oil for Korea," he added. South Korea is currently one of top three importers of Canadian canola oil.

Carr served as Canada's resources minister starting in 2015 before taking the position at the Ministry of International Trade Diversification last year.