The Transitional Justice Working Group said in the report, titled "Mapping the Fate of the Dead: Killings and Burials in North Korea," that almost all "state-sanctioned killings reported were public executions by firing squad,"

"Brief 'trials' almost always occur on the spot immediately before a public execution, where charges are stated and a sentence given without legal counsel for the accused," it said. Their charges could include watching South Korean media.

Such public executions occur "commonly on river banks, hillsides, marketplaces and school grounds, with the size of the crowd often in the hundreds but over 1,000 in some instances," the group's Executive Director Lee Young-hwan said.

The report is based on interviews with 610 North Korean defectors in South Korea from April 2015 to February 2019, with more than half of them from North Hamgyong Province bordering China.

It is an update to the organization's first report published in 2017 under the "Mapping Project" to document "sites of state-sanctioned killings, where the dead are disposed of, and locations which may house documents related to the events" in North Korea.

Of the total interviewees, 83 percent witnessed a public execution and 53 percent were forced to do so at least once, according to the report. It also said 16 percent of them had a family member executed by the North Korean authorities.

Some interviewees also experienced being searched by guards using metal detectors to confiscate mobile phones before public executions in 2013 and 2014 to prevent recording.

"This suggests regime concern about information on public executions getting out of the country," it said.

Last week, the state-run Korea Institute for National Unification also said in an annual report that North Koreans' right to life is still at risk though public executions appear to have become less common. The think tank said it is unclear if the drop is due to an increase in the number of secret executions. 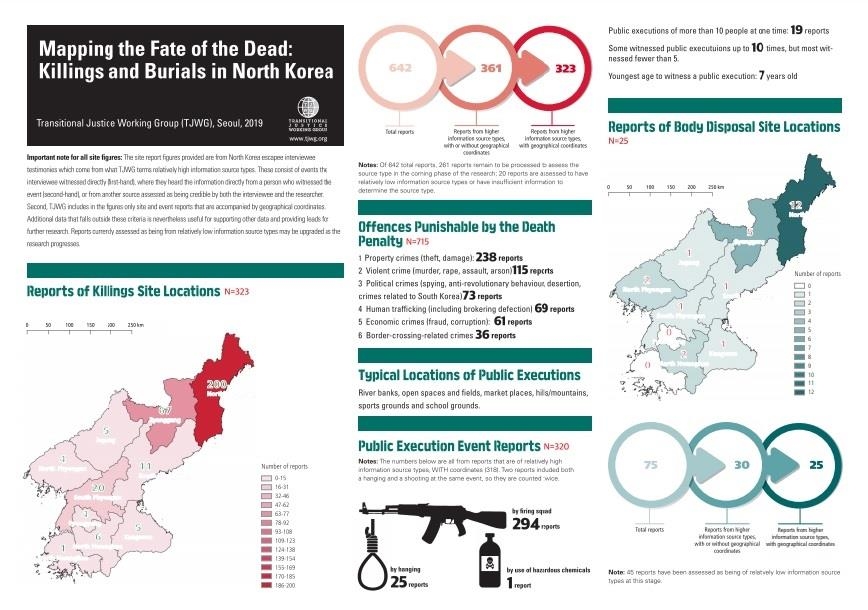