SEOUL, June 10 (Yonhap) -- The younger daughter of Korean Air Lines Co.'s late chairman, Cho Yang-ho, returned to two management positions at logistics-centered Hanjin Group on Monday, 14 months after she was forced to resign amid controversy over her misbehavior.

"At Hanjin KAL, she will be in charge of managing corporate social responsibility and leading new business development for Hanjin Group," a Hanjin Group spokesman said.

Last year, Hyun-min took flak for allegedly throwing a cup of water during a business meeting with a partner firm. But she was acquitted after being investigated on charges of violence and obstruction of business. 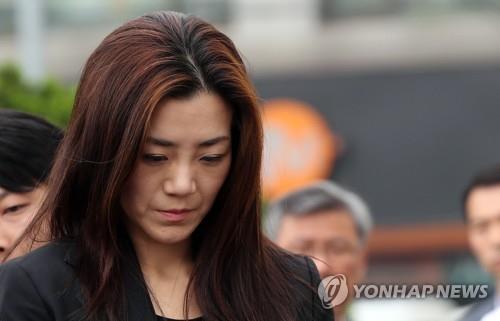 Hyun-min's comeback came at a time when the country's 14th-largest conglomerate is under growing pressure from a local activist fund to improve its corporate governance and even change its management.

KCGI is taking issue with Hanjin Group over the adequacy of loans it took out from banks and the severance for late chairman Cho. Also, the homegrown fund is questioning whether Cho Won-tae's appointment as Hanjin KAL chairman was made in accordance with proper procedures. Won-tae is the late chairman's only son.

KCGI's stake in Hanjin KAL stands at 15.98 percent, while the Cho family and other relatives together hold a 28.93 percent stake, including 17.84 percent held by the late chairman, in the company. The National Pension Service owns a 7.34 percent share of the firm.

The Cho family's past misdeeds have made a stir in the country.

Hyun-min's elder sister, Hyun-ah, made international headlines in the infamous "nut rage" incident in 2014, when she ordered the pilot of the Korean Air plane she was aboard to return to its gate at a New York airport after losing her temper over the way she was served macadamia nuts.

She was sentenced to one year in prison for violating aviation law in late 2014 but was released in early 2015 when a high court suspended the sentence.

In May last year, the late chairman's wife, Lee Myung-hee, was summoned by the police after she allegedly physically and verbally abused employees at Hanjin.

The Cho family's misbehavior was a fresh reminder of the corruption and exploitive behavior of the country's "chaebol," or family-run conglomerates.

In April, the late chairman died of a chronic lung disease in the United States, less than two weeks after he was removed from the national flag carrier's board.