SEOUL, June 11 (Yonhap) -- Chung Hyun-ho, president of Samsung Electronics, was questioned by prosecutors on Tuesday about his suspected involvement in alleged accounting fraud at the company's biotech affiliates.

The 59-year-old Chung, known as one of the closest aides to Samsung Electronics Vice Chairman Lee Jae-yong, arrived at the Seoul Central District Prosecutors Office around 8:50 a.m. in compliance with a summons from the prosecution.

Prosecutors reportedly grilled Chung about his role in the conglomerate's alleged systematic attempt to cover up accounting irregularities at contract drug manufacturer Samsung BioLogics and its affiliate, Samsung Bioepis. 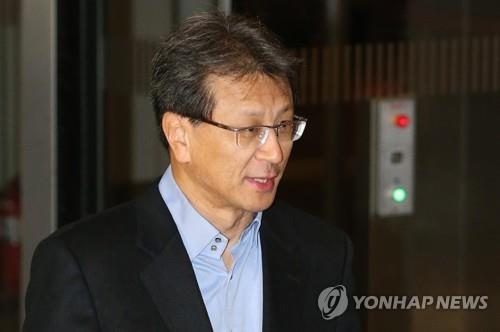 Window dressing was allegedly committed in 2015 to inflate the valuation of Samsung BioLogics ahead of its initial public offering in 2016. The then-loss making Samsung BioLogics reported sudden profits in 2015 after it changed the method used to calculate the valuation of its stake in Samsung Bioepis, a joint venture with U.S.-based Biogen Inc. Civic activists have claimed the alleged window dressing was intended to enhance Lee's control of Samsung Group by seeking to inflate Cheil Industries Inc.'s stake in Samsung BioLogics ahead of Cheil's merger with Samsung C&T Corp. in 2015.

One of Chung's subordinates, who was accused of deciding at a company meeting on May 5, 2018, to manipulate and destroy evidence of accounting irregularities by the two Samsung biotech companies, was arrested last Wednesday, while a number of lower-ranking executives of the three Samsung companies were arrested in May on the same charges.

Prosecutors suspect that the alleged scheme to destroy evidence was finally approved by a top-level meeting at a Samsung Group guest house in Seoul on May 10, 2018, which was attended by Lee and Chung.

Samsung has denied the allegations, saying the May 10, 2018, meeting was held to discuss business plans of the two biotech companies.

Prosecutors say they will later decide whether to request an arrest warrant for Chung and whether to summon Lee.