SEOUL, June 11 (Yonhap) -- Ruling and opposition parties on Tuesday expressed their condolences over the death of former first lady Lee Hee-ho, while honoring her lifetime devotion to the development of South Korean democracy.

Lee, the widow of former President Kim Dae-jung, died the previous day at the age of 96 at a Seoul hospital, where she had fought liver cancer since March.

"We cherish, with deep reverence, the memory of the life of former first lady Lee Hee-ho who was a great female activist in the country's democracy and human rights movement," Rep. Hong Ihk-pyo, the spokesman of the ruling Democratic Party, said.

"She was a true first lady who continuously brightened the light for a better world and a giant who has lightened up hope for a new era," the spokesman said.

"Former first lady Lee Hee-ho, who was 'a political comrade' of former President Kim Dae-jung as well as his partner, devoted her life to the development of the country's democracy," Rep. Min kyung-wook, the spokesman of the main opposition Liberty Korea Party (LKP), said.

The LKP hopes Lee rests in peace, while paying tribute to her lifetime passion and lofty will to promote democracy and rights for women and the disabled, Min said.

"Beyond being the spouse and political comrade of former President Kim Dae-jung for 47 years, Lee herself was a great pro-democracy activist who cultivated a big tree thick with leaves of democracy," Rep. Lee Jong-cheol, the spokesman of the minor opposition Bareunmirae Party, said. 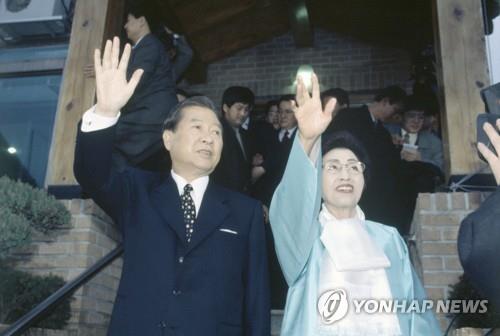