Shares in Hyundai Motor closed at a 52-week high of 143,500 won (US$121) on Tuesday, up 0.35 percent from the previous session's close. Hyundai Motor has advanced 21 percent this year, far outperforming the broader KOSPI's 3.5-percent gain.

Hyundai Motor's new SUV models, such as the Palisade and the Santa Fe, have received strong responses from domestic consumers. The Santa Fe is already available in the United States and the Palisade will go on sale in the U.S. next month, Hyundai said.

"Hyundai was late in launching new SUV models amid rising appetite for SUVs among consumers but fortunately demand for the Santa Fe and the Palisade is strong. Moreover, the Korean won's decline versus the U.S. dollar is helping Korean exporters," Kim Jin-woo, an analyst at Korea Investment & Securities Co., said by phone. 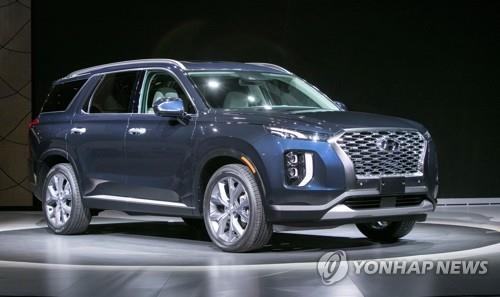 This year, the local currency has lost 5.5 percent to the greenback, closing at 1,180.40 won on Tuesday.

On top of SUV models, Hyundai said it plans to sell the all-new Sonata sedan in the U.S. later this year to boost sales.

Hyundai plans to continue to add competitive SUV models to its lineup -- the Venue entry SUV and the GV80 SUV which is the first SUV model under the independent Genesis brand initially eyed for the domestic market later this year.

The company has yet to decide on when to launch the Venue and the GV80 in the U.S. market.

If they reach the U.S. market and garner strong responses from customers, it will provide a boost to the carmaker's earnings results for this year, analysts said.

In the January-March quarter, Hyundai's net profit jumped 30 percent to 954 billion won from 732 billion won a year earlier helped by strong demand for new SUVs and a weak won.

Looking ahead, analysts expected the automaker to reap an operating profit exceeding 1 trillion won in the April-June quarter.

For the whole of this year, brokerages said Hyundai will be able to achieve an operating profit of at least 3.8 trillion won on the back of its improved product mix. It reported an operating income of 2.42 trillion won last year.

"Hyundai's expanding SUV lineup is clearly resonating with customers, our SUV mix is becoming more in line with the industry and represents a big opportunity for Hyundai sales throughout the rest of this year," John Cook, director in charge of sales operations at Hyundai Motor America, said in a recent statement.

Hyundai's affiliate, Kia Motors Corp., is also expected to report improved earnings results in the second quarter on higher demand for the Telluride, Sorento and Sportage SUVs in the U.S., analysts said.

In the first quarter, Kia's net profit jumped 50 percent to 649 billion won from 432 billion won a year ago. Its shares have soared 27 percent this year to end at 42,800 won on Tuesday.

Improving sales in the U.S. will help the two achieve their combined annual sales target of 7.6 million vehicles -- 4.68 million by Hyundai and 2.92 million by Kia -- in global markets in 2019. But lackluster sales in China remain woes for them, analysts said.