Lee, wife of late former President Kim Dae-jung, died Monday at the age of 96 after battling liver cancer. She was credited as one of the best supporters of Kim's efforts to bring democracy to South Korea and make peace with North Korea.

Her passing came as the inter-Korean peace process remains stalled in the wake of February's no-deal summit between North Korean leader Kim Jong-un and U.S. President Donald Trump, and raised the prospect of Pyongyang sending a special delegation to express condolences over her death.

When Kim Jong-un's father and former leader, Kim Jong-il, died in late 2011, Lee visited Pyongyang and met with Kim Jong-un, becoming one of the first South Koreans to meet with the new leader. Images of Lee holding Kim Jong-un's hands and comforting him were widely disseminated.

"Considering that Lee herself visited the North when Kim's father, Kim Jong-il, died, the North Korean leader could send a delegation to her funeral," Yang Moo-jin, a professor at the University of North Korean studies, said.

"If they do come, it will naturally lead to talks with South Korean officials and have a positive impact on resuming the stalled inter-Korean talks," he said. 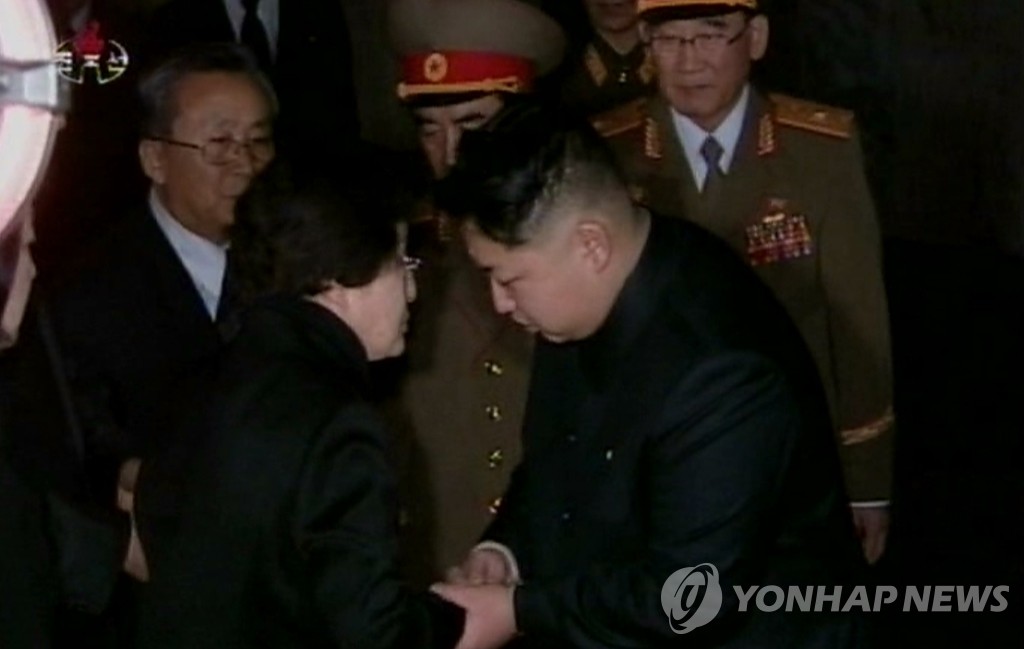 Cheong Seong-chang, a senior researcher at the Sejong Institute, said North Korea could send a delegation of relatively low-level officials, considering that President Moon Jae-in is out of Seoul for his European tour and that Lee was not a former president but a former first lady.

"If North Korea sends a delegation with Choe Ryong-hae, the president of the Presidium of the North's Supreme People's Assembly, as its chief, it will be an opportunity to confirm leader Kim Jong-un's willingness to improve inter-Korean relations," Cheong said.

"But if the North just sends a telegram of condolence, skepticism will rapidly spread about Kim's willingness to improve inter-Korean ties," he said.

Lee's funeral is slated for Friday.

North Korea has a history of sending delegations to the South to express condolences over the death of figures who contributed to inter-Korean relations.

When Lee's husband, former President Kim, died in 2009, then North Korean leader Kim Jong-il sent a condolence message to the bereaved family the next day and sent a delegation of special envoys to his funeral.

The six-member delegation included Kim Ki-nam, who was known to be a key confidant of then leader Kim, and Kim Yang-gon, then chief of the United Front Department in charge of inter-Korean affairs.

The visit led to then South Korean President Lee Myung-bak's first meeting with North Koreans in 18 months since coming to power, spurring hopes for a resumption of cross-border dialogue.

A unification ministry official said North Korea has not expressed its intent to send a delegation.

"It is inappropriate for the government to prejudge whether a delegation will come to mourn (Lee's death) at this point," a unification ministry official said.

Gauging the possibility of the envoys' visit, experts stress former President Kim's contribution to inter-Korean reconciliation as the architect of the "sunshine policy" that actively pushed for cross-border exchanges, and Lee's personal ties with Kim Jong-un.

Former President Kim held the first-ever inter-Korean summit with Kim Jong-il in 2000. Lee accompanied her husband to Pyongyang for the historic meeting.

Her Pyongyang visit in 2011 was to pay respects upon the death of Kim Jong-il. The conservative Lee Myung-bak administration did not send an official delegation to the funeral at that time amid heightened tensions between the two sides.

In 2015, Lee visited North Korea again upon a personal invitation from Kim Jong-un, though the two did not meet during her trip.

"As a matter of courtesy the North could send a delegation, but sending one would mean having talks with the South Korean government and that could be very uncomfortable for Pyongyang, which has repeatedly said that there will be no talks if Seoul handles the geopolitical situation depending on the U.S.," said Lim Eul-chul, a professor at the Institute for Far East Studies at Kyungnam University.

"They must have a lot on their minds right now," he said.