SEOUL, June 11 (Yonhap) -- The amount of state allowances paid to those unemployed or seeking jobs soared to a new high for a third consecutive month in May, data showed Tuesday, largely due to a recent expansion of benefits that led to a sharp increase in the number of beneficiaries and a rise in unemployment.

According to the data from the labor ministry, the government paid nearly 759 billion won (US$643 million) in various benefits to those with no jobs in May, which marks a 24.7 percent spike from the same month last year.

The government largely attributed the rise to a significant expansion of benefits under the incumbent administration that also led to a sharp increase in the number of people entitled to such benefits to around 503,000 people last month, up 12.1 percent from about 449,000 a year earlier.

The average amount paid to each person also jumped 11.3 percent on-year to more than 1.5 million won from 1.35 million won over the cited period, according to the ministry.

Still, the increase also comes amid record high unemployment rates, which shot up to 4.4 percent in April, the highest for any April since 2000. Comparable figures for May are set to be published this week. 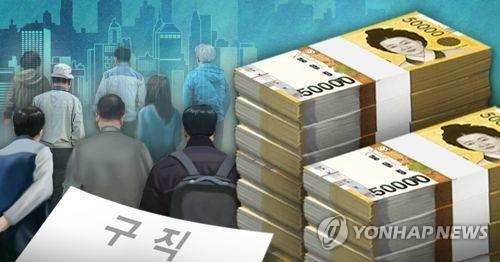