SEOUL, June 11 (Yonhap) -- The number of foreign tourists visiting Seoul is expected to reach an all-time high over 14 million this year, the city's mayor said Tuesday.

Mayor Park Won-soon made the forecast during a session of the Seoul Metropolitan Council.

"Seoul now ranks seventh worldwide in terms of foreign tourist arrivals. The number reached 13.6 million in 2016 before falling slightly due to the THAAD crisis," Park said, referring to a dive in the number of Chinese visitors caused by the installation of a U.S. anti-missile defense system in South Korea. 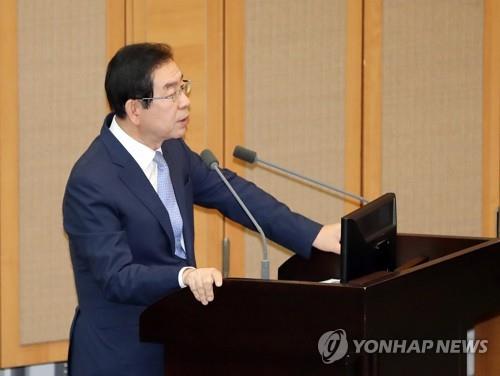 "This year, the number of foreign tourists is increasing again and expected to top 14 million, setting a new record," said Park.

In 2016, Seoul received 13.57 million tourists, the highest figure on record.

"The population of Seoul is decreasing but a large population is not a key element of an advanced city. Seoul's daytime population has been increasing and an increase in foreign tourists is encouraging," the mayor said.

He then spoke of plans to upgrade the role of Gimpo International Airport in western Seoul in line with the growth of tourist arrivals.

"It is necessary to diversify or improve the role of Gimpo airport. A study is now under way on how to utilize Gimpo airport and its neighborhood and the conclusion will be reached within this year," Park said.