SEOUL, June 11 (Yonhap) -- Defense Minister Jeong Kyeong-doo visited a war remains excavation site near the border with North Korea on Tuesday, pledging to do his best to bring as many remains of soldiers killed in the 1950-53 Korean War to families as possible.

Since April, South Korea's military has been carrying out demining and excavation work at Arrowhead Ridge in Cheorwon, a former battle site where South Korean, American, and French soldiers fought invading Chinese and North Korean forces at the height of the war.

"Arrowhead Ridge is the place of battles where many young men, including from South Korea, the U.S. and France, fought to protect a free democracy," Jeong said while presiding over an informal ritual prayer ceremony for remains recovered last week.

The remains appear to be of either American or French soldier based on the bones structure and artifacts found with the remains, the ministry said, adding that it is the first time that remains of a U.N. soldier was found during the ongoing excavation work.

During the battles on the ridge, around 100 American and French soldiers are believed to have been killed, and bodies of more than 20 soldiers have not been recovered, according to Seoul government data.

Expressing gratitude for their sacrifice, the minister pledged to strive further to repatriate remains of fallen service persons to their homeland and family members.

"The implementation of the military agreement has practically reduced military tensions, which allows us to excavate war remains inside the DMZ ... We will continue to push for the project while maintaining firm military readiness posture," the minister said.

Jeong was accompanied by U.S. Forces Korea commander Gen. Robert Abrams as well as officials from the U.S. and French embassies in Seoul, according to the ministry.

Under the inter-Korean military accord signed last year aimed at reducing tensions and building trust, Seoul and Pyongyang had planned to carry out the joint excavation project together for about six months from April. But the North has remained unresponsive to calls for jointly carrying out the project as agreed, leaving the South Korean military to carry out the operation alone.

As of Sunday, the military has found a total of 425 pieces of bones and 29,813 items since April. 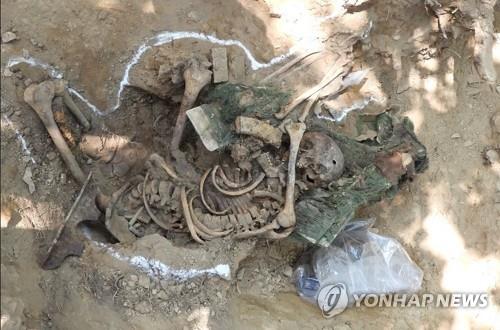