SEOUL, June 11 (Yonhap) -- South Korea's economic growth may further slow down this year should the escalating trade tension between the United States and China lead to a hard landing of the world's No. 2 economy that is also the world's single largest importer of South Korean goods, a local expert noted Tuesday.

"The economies of South Korea and China tend to move in a similar direction," the researcher said in a policy forum jointly hosted by the Korea Institute for International Economic Policy and Korea Institute of Finance. 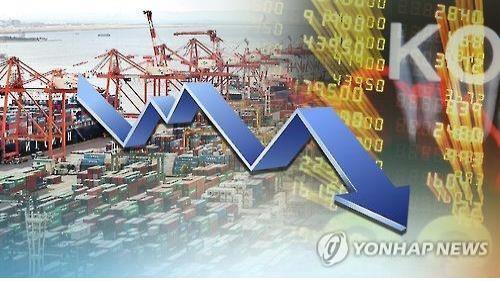 In April, the International Monetary Fund raised its growth outlook for the Chinese economy to 6.3 percent from 6.2 percent, a month before the drawn out trade negotiations between Washington and Beijing ended without a deal.

Tensions between the world's two largest economies have since been on a steady increase with both the U.S. and China imposing punitive tariffs of up to 25 percent on imports from each other.

South Korea's exports have apparently been taking direct hits, dipping for six consecutive months since December, while its shipments to China dropped for seven straight months as of May.

The Bank of Korea slashed its growth outlook for Asia's fourth-largest economy to 2.5 percent from 2.6 percent forecast in January.

Joo insisted the country's growth may slow to as low as 2 percent when and if China's own growth slows to 5.2 percent.

What is concerning is that the problem facing South Korean exports may not immediately go away even if the U.S.-China trade dispute ends, according to Joo.

The researcher said the end of the trade dispute may lead to a sharp increase in shipments of U.S. products to China, leading to increased and persistent competition for South Korea's key export items that include IT, steel products and automobiles.