SEOUL, June 12 (Yonhap) -- Fifteen years after its first free trade pact with Chile, exports-reliant South Korea has been in a rush to clinch more deals to sell more goods in overseas markets, and its efforts have paid off.

But recent events on the global trade scene are a wake-up call for Seoul to recalibrate its push for free trade deals in a two-pronged way -- by deepening existing FTAs and diversifying its portfolio -- according to experts.

South Korea currently holds 15 similar deals covering a whopping 52 countries, including the United States and China. The FTAs were signed not only with individual nations but also with regional blocs such as the Association of Southeast Asian Nations (ASEAN).

Seoul's free trade deal with Washington went into effect in 2012, and it was recently revised to reflect Washington's demands in the auto sector.

South Korea implemented an FTA with China, its biggest trading partner, in 2015. A similar deal with the European Union (EU), the world's single largest economic bloc, was also fully implemented in 2015, around four years after it was provisionally adopted.

"We have been enjoying the benefits of the FTAs, but (South Korea) is currently facing challenges with the looming prospect of protectionism," said Je Hyun-jung, the director of trade studies at the Korea International Trade Association. "South Korea, whose economy is heavily dependent on trade, needs to find a breakthrough by utilizing FTAs," Je said.

On the back of such efforts, South Korea became the seventh country in the world to achieve annual exports of over US$600 billion in 2018, with the 52 nations accounting for 73 percent of total outbound shipments, according to data from the trade ministry.

The figures translate into South Korea having free trade deals with economies that are responsible for 77 percent of the world's gross domestic product.

South Korea is increasingly finding itself being caught off guard, however, as the escalating trade war between the U.S. and China exposes the economy's shaky status -- in particular, its heavy dependence on its top two trading partners, who together take up roughly 40 percent of its exports.

The world's top two economies have recently been in a tit-for-tat war over trade, sending ripples through the global economy.

Hit hard by the trade frictions and a drop in chip prices, the country's exports came to $45.9 billion in May, down 9.7 percent from the $50.68 billion tallied a year earlier, extending their slump for the sixth consecutive month.

Against the sobering reality, Seoul needs to go beyond just repackaging the deals, and going forward, it needs to forge deeper ties with developing countries and ease its dependency on the U.S. and China, experts say.

Je stressed the importance of reviewing existing deals to use them more effectively. "While clinching new deals is also important, we need to review whether the existing ones are functioning as well," the researcher said. "We need to forge deeper ties with developing countries, but that is not enough."

Taking such factors into consideration, South Korea is currently in talks with India to enhance the Comprehensive Economic Partnership Agreement (CEPA), which took effect in January 2010, seeking more market liberalization.

Seoul also plans to upgrade its FTA with the EU, and earlier this week it struck an agreement with Britain to maintain the current FTA even if the country leaves the world's single largest economic bloc without agreeing on post-Brexit conditions.

In order to expand its FTA territory, the South Korean government has already been making efforts to sign new FTAs, including separate deals with individual members of ASEAN.

Seoul, which earlier clinched bilateral FTAs with Vietnam and Singapore, is currently in talks with Malaysia, Indonesia and the Philippines. If all the negotiations under way are successful, South Korea will have free trade deals with all five of its top ASEAN trading partners.

"To cope with the uncertainties in global trade, it is important to diversify and expand FTAs," said Yeo Han-koo, South Korea's deputy minister for trade negotiations, during a meeting with trade experts last week. "We will divide the world into five zones, and focus on forging new ties while reinforcing existing ones," he added. 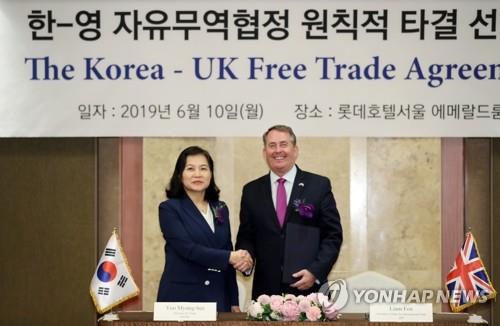 Seoul has also signed a new FTA with a group of five Central American countries -- Costa Rica, El Salvador, Honduras, Nicaragua and Panama -- which has not been implemented yet.

Talks on the FTA with South America's Mercosur bloc, which encompasses Brazil, Argentina, Paraguay and Uruguay, are also under way, with the goal of closing the free trade deal by the end of next year. Other pending free trade partners include Israel.

Such efforts will benefit the country's trade, especially considering Seoul has been signing a relatively low number of agreements with developing countries compared to other advanced nations, according to experts.

"Countries' trade tends to increase when their deals cover a wider scope of segments with more legally binding provisions," the state-funded Korea Institute for International Economic Policy said in a report. "The trend was especially clear for trade with developing countries."

On top of such efforts, South Korea should also work hard on the domestic effects of its FTAs and find room for improvements, experts added.

"For the sustainability of FTAs, the government needs to keep track of the impact of such agreements on the local economy," said Kim Yang-hee, a professor of economics at Daegu University.

"We need to have more players enjoy benefits from the existing ones as well, as the deals often concentrate on conglomerates and not small and medium-sized firms," Kim added.

The South Korean trade ministry said it plans to come up with customized strategies for different regions to enhance its FTAs later this month.