The number of employed people reached 27.32 million in May, an increase of 259,000 from the same month in 2018, according to the data compiled by Statistics Korea.

The statistics agency said the number of unemployed people stood at 1.145 million in May, the highest level for any May since 2000.

The unemployment rate for young adults -- those aged between 15 and 29 -- fell to 9.9 percent last month from 10.5 percent tallied a year earlier.

The employment rate -- referring to the proportion of employed working-age adults -- reached 61.5 percent in May, marking the highest level for any May since the statistics agency started to compile such data in 1989.

By industry, the manufacturing sector -- the backbone of South Korea's economy -- continued to suffer a decline in job offerings by losing 73,000 jobs in May.

It marked the 14th straight month of employment decline in the manufacturing sector due to weak demand in the semiconductor, communication equipment and other electronic parts industries.

"The continued employment decline is a negative signal and the number of employed people in the manufacturing sector plunged to a low of 170,000 in January, but the pace of decline is slowing down" said Jeong Dong-wook, director of Statistics Korea's employment statistics division.

In contrast, the health and social welfare sectors added 124,000 jobs, and the education service sector saw an increase of 47,000 jobs last month.

Separate data showed that the amount of state allowances paid to people who are unemployed or seeking employment soared to a new high for a third consecutive month in May, largely due to a recent expansion of benefits that led to a sharp increase in the number of beneficiaries and a rise in unemployment.

According to the data from the labor ministry, the government paid nearly 759 billion won (US$643 million) in various benefits to those without jobs in May, which marks a 24.7-percent spike from the same month last year.

South Korea's economy is feared to lose its upward momentum in the face of headwinds stemming from the growing trade row between the U.S. and China.

The Bank of Korea earlier trimmed its economic outlook to 2.5 percent from 2.6 percent citing a protracted slump in exports and weak business spending. 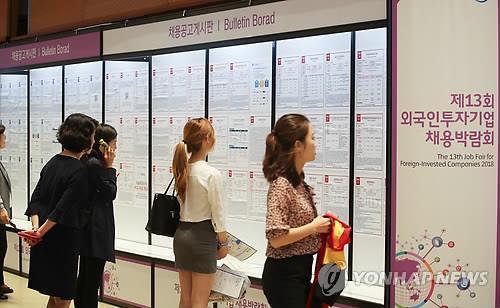