SEOUL, June 12 (Yonhap) -- North Korea's official newspaper confirmed an outbreak of African swine fever in the country on Wednesday, its first acknowledgment of the disease since Pyongyang reported a case to an international organization last month, saying nationwide efforts are under way to prevent its spreading.

"Emergency preventive efforts are actively underway across the country to stem the spread of African swine fever, a highly contagious virus," the Rodong Sinmun said in an article, adding that relevant government agencies and municipalities are working together to guarantee the safety of livestock.

North Korea reported a confirmed case of the animal disease at a pig farm in a region bordering China to the World Organization for Animal Health late last month. Its media, however, had been mum on the outbreak.

South Korea proposed working together with North Korea to stem the spread of the fever but the North has not responded to the offer.

A Seoul official said that there have been no additional confirmed cases of the fever in North Korea but the North Korean newspaper's report on nationwide preventive efforts raised the possibility of its spread.

The animal disease outbreak is feared to add to the already strained food supply in the impoverished state by possibly devastating its livestock industry at a time when it is facing one of the worst food shortages in its history caused by crushing global sanctions and years of unfavorable weather conditions. 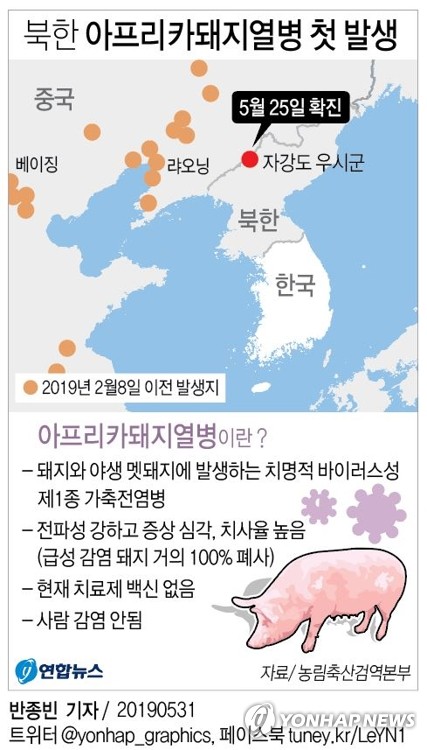