OSLO, June 12 (Yonhap) -- South Korea's presidential office said Wednesday it was aware of North Korean leader Kim Jong-un's latest letter to U.S. President Donald Trump in advance amid speculation that Seoul might have played a role in delivering it.

"We had knowledge (of it)," Yoon Do-han, senior secretary to President Moon Jae-in for public communication, said in a text message to the Cheong Wa Dae press corps.

He refused to go into details. "(I) won't reveal more than that." 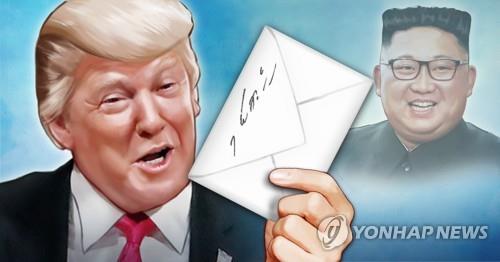 A day earlier, Trump said he had received a "beautiful" and "very warm" personal letter from Kim. The two sides mark the first anniversary of their historic Singapore summit this week.

There's not much fanfare over it, however. The nuclear talks have been in a stalemate since their second meeting, held in Hanoi in late February, collapsed without any accord.

While Trump kept the contents of the letter secret, keen attention is being paid to whether there are specific preparations for resuming dialogue.

A news report said Suh Hoon, chief of South Korea's National Intelligence Service (NIS), is on a visit to the United States after "contacting" the North Korean side.

The NIS said it was not involved in the matter, but it did not clarify whether Suh is making a trip to the U.S.

"(The NIS) had no involvement in the issue of the delivery of Chairman Kim Jong-un's personal letter," it said in a statement.

While traveling to Helsinki earlier this week, the South Korean president said "dialogue" is under way between the two Koreas and between the U.S. and North Korea.

Moon added that both Trump and Kim have continuously expressed their mutual trust and reiterated their commitment to talking to each other.

He expressed optimism that they will restart formal negotiations in the near future.

He plans to deliver a peace-related speech, titled "Peace for the People," at the University of Oslo later Wednesday, a key event in his three-day state visit to Norway, the second leg of his whirlwind Northern Europe tour.