BUSAN, June 12 (Yonhap) -- The remains of a Canadian Korean War veteran were buried at the U.N. Memorial Cemetery in South Korea's southeastern port city of Busan on Wednesday.

The ashes of Albert Hugh McBride arrived at Incheon International Airport, west of Seoul, for burial at the cemetery the previous day.

Hosted by the Canadian Embassy, the burial ceremony was attended by the widow and grandson of the war veteran, the Canadian ambassador and some Korean War veterans. 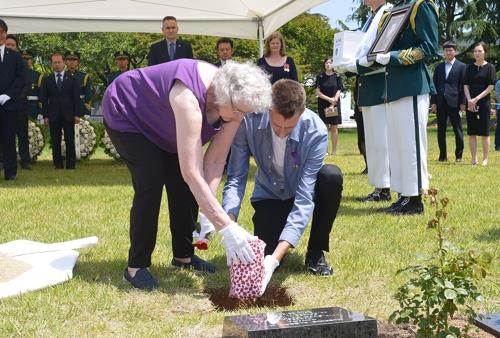 Tank driver McBride fought in the Korean War from November 1951 until January 1953 as a member of Lord Strathcona's Horse, a regular armored regiment of the Canadian army. He participated in the Second Battle of Hook between U.N. and Chinese troops near Panmunjom, north of Seoul, in November 1952.

His burial on South Korean soil came at the request of his wife.

McBride is the ninth Korean War veteran from the U.N. allied forces to be buried at Busan's U.N. cemetery after dying in his home country.

About 2,300 war veterans from 11 U.N. allied countries were buried at the Busan cemetery, including those from Australia, Canada, Britain and Turkey.

During the 1950-53 war, 21 countries sent around 1.96 million soldiers and medics to South Korea against invading North Korea. Of them, more than 40,000 were killed in action and nearly 10,000 are still missing, according to government data.
(END)