SEOUL, June 12 (Yonhap) -- The United Nations Command (UNC) said there is no new restriction on civilian access to a guard post (GP) on the border with North Korea.

The statement came after the defense ministry said earlier this week that the UNC is temporarily restricting access to the GP in the eastern border town of Goseong to beef up safety measures for visitors after it was designated a cultural asset because of its historical importance.

The UNC oversees activities within the Demilitarized Zone (DMZ).

"The guard post identified in reports was not recently restricted. This guard post is not a site for the Demilitarized Zone (DMZ) Education & Orientation Program and was not previously open to public access," the UNC said on Tuesday in an answer to Yonhap News Agency's request for its stance.

"The safety of any visitors to sites in the DMZ is of paramount importance to the UNC," it said. 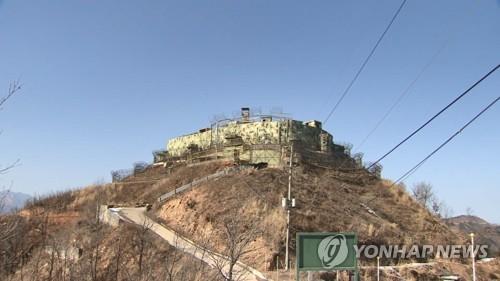 It is not known if and when the GP will be open to civilians, though officials say the South Korean government has been mulling adding it to the so-called Peace Trail trekking course in the region.

The UNC said it "will work closely" with the defense ministry on the development of a fresh trail there "that requires further certification process for safety and security."

The Goseong GP was installed in 1953 right after the three-year Korean War. It was the first such facility in the country and became a symbol of national division.

It was slated to be dismantled, along with 10 other frontline GPs, in accordance with a military pact between the North and the South. In consideration of its historic significance, however, Seoul decided to keep it intact after consultations with North Korea.

The North also demolished 10 GPs inside the DMZ, preserving one on the same grounds.