He was addressing the Oslo Forum in the Norwegian capital on the first anniversary of the historic Singapore summit between U.S. President Donald Trump and North Korean leader Kim Jong-un.

He admitted that denuclearization talks appear to be in a stalemate but described it as part of a process to build mutual confidence.

The ongoing hiccup following the second Kim-Trump meeting in February is because they "need some time to understand each other thoroughly. It is the process of thawing out hostile feelings that have persisted for the last 70 years," he added.

Moon pointed out that both Kim and Trump are still expressing trust in each other and their firm resolve toward further dialogue. 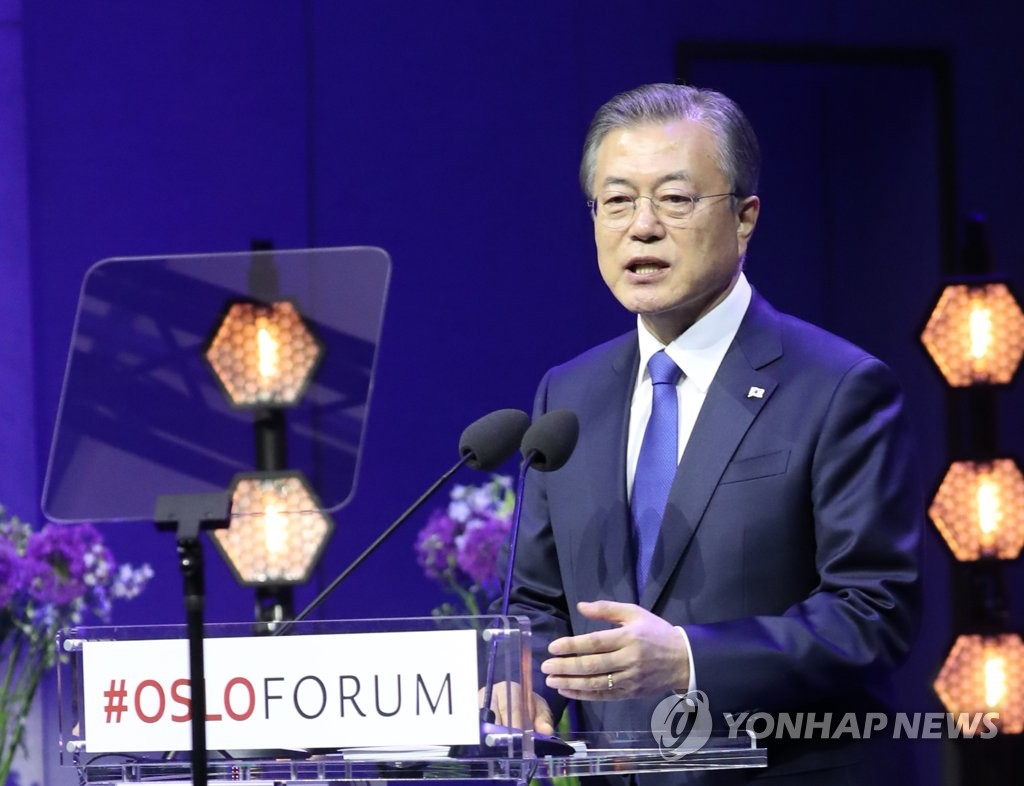 Earlier this week, Trump announced that he had received a "beautiful" and "very warm, nice" letter from Kim. Its concrete contents remain a secret.

Moon, a liberal leader who has endeavored to expedite Pyongyang-Washington talks, emphasized that relevant parties shouldn't be swayed by some troubles in their journey toward peace.

He cited Norway's experience in regional peace, speaking at the University of Oslo.

He referred to a "positive peace" concept formulated by a famous Norwegian sociologist, Johan Galtung.

As a first step, the two Koreas must address the damage frequently reported in their border areas, especially in and around the Demilitarized Zone (DMZ), Moon said, adding that the "permanent legations" laid out in the 1972 German Basic Treaty can be an example.

His remarks were reminiscent of his landmark Berlin speech in 2017, in which he proposed a new peace initiative for the peninsula, leading to North Korea's participation in the PyeongChang Winter Olympics and a brisk round of summit diplomacy on denuclearization and regional peace.

Oslo is the second leg of Moon's eight-day tour of Northern Europe to last through this weekend. He made a state visit to Finland and plans to visit Sweden at the invitation of King Carl XVI Gustaf.