OSLO, June 12 (Yonhap) -- South Korean President Moon Jae-in voiced hope Wednesday that he will meet with North Korean leader Kim Jong-un ahead of U.S. President Donald Trump's visit to the peninsula at the end of this month.

Moon's offer came amid renewed expectations for a possible breakthrough in efforts to restart nuclear talks following the news of Kim's new personal letter to Trump.

Kim also sent a condolence message on the passing of Lee Hee-ho, the widow of former South Korean President Kim Dae-jung, which includes a positive message on inter-Korean relations.

"I think it's desirable (for me) to meet Chairman Kim Jong-un, if possible," before Trump's trip to South Korea, Moon said after delivering a keynote speech on his "Peace for the People" vision at the Oslo Forum. 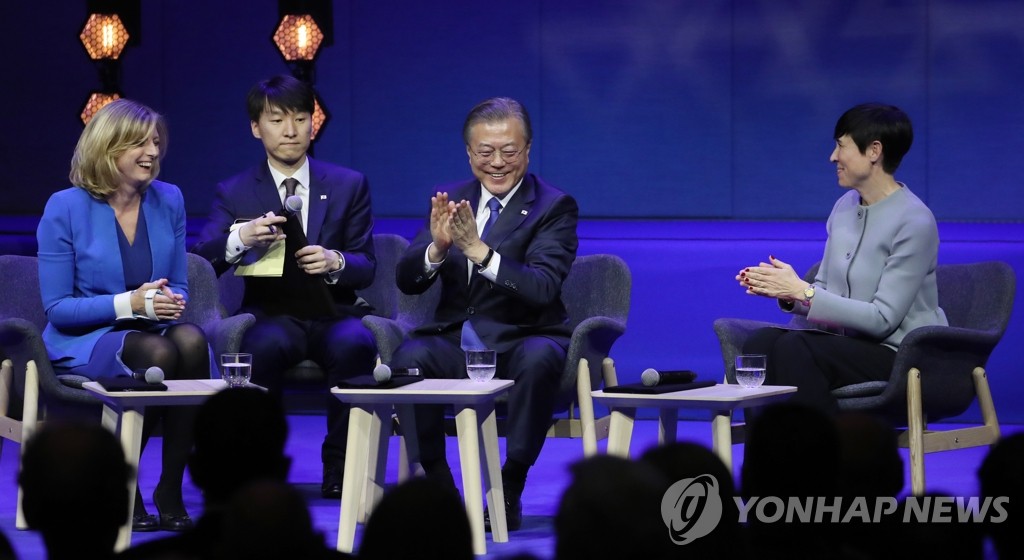 Trump is scheduled to attend the two-day G-20 summit to open in Osaka, Japan, on June 28. He plans to travel to South Korea as well during the upcoming Northeast Asia tour. No exact schedule has been announced yet, while observers expect him to visit Seoul on his way back home.

Moon reiterated that he's ready to hold a fourth summit with Kim at any time and that the decision is up to Kim.

He was responding to a question from Laura Bicker, a BBC correspondent in Seoul, who moderated the post-address Q&A session joined by Norwegian Foreign Minister Ine Eriksen Soreide.

He said he was also briefed on its contents as the allies usually share such information.

Now that the leaders continue to trade such "warm letters," Moon said, dialogue momentum is being maintained. 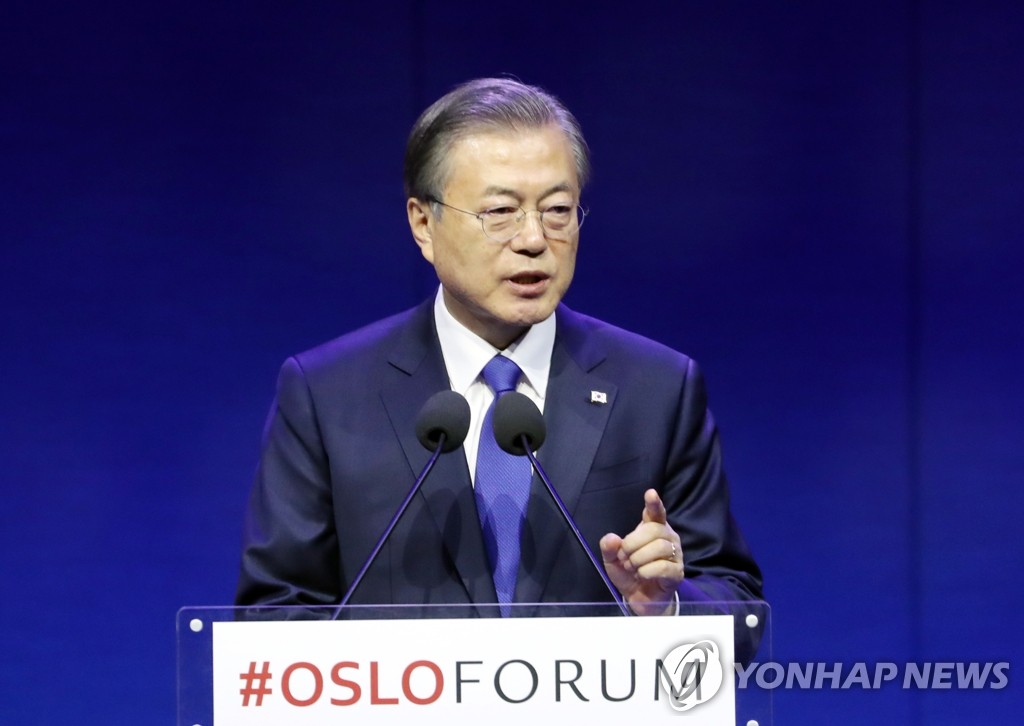 In Korea, the North's leader delivered his condolence message and flowers to the bereaved family of Lee via his younger sister, Kim Yo-jong, who is a senior Workers' Party official.

Kim said Lee's dedication and efforts for peace have become a "precious foundation" for the ongoing inter-Korean relationship, which is "moving toward the path of self-reliant unification, peace and prosperity."

Addressing the conference at the University of Oslo, Moon presented his longer-term peace vision, a follow-up to his landmark Berlin speech in 2017, in which he proposed a new peace initiative for the peninsula.

He vowed non-stop efforts to resolve "structural violence" that Koreans have suffered due to division.

He referred to the "positive peace" concept formulated by a famous Norwegian sociologist, Johan Galtung.

The two Koreas must first address the damage frequently reported in their border areas, especially in and around the Demilitarized Zone (DMZ), Moon said, adding that the "permanent legations" laid out in the 1972 German Basic Treaty can be an example.

He underlined the significance of broadening public support for the peace initiative on the basis of the people's confidence that they will benefit from it.

"If we are to bring together positive thinking that peace is a good thing that improves the quality of life, it will heal the division in the hearts of people who have been separated by different ideology and views," he said.

Moon noted that bringing lasting peace to Korea is no easy task.

"The time needed will not be short. However, when mutual understanding allows enmity to dissolve, like the snow that melts and flows to the ocean, peace on the Korean Peninsula will also reach its goal," he said. 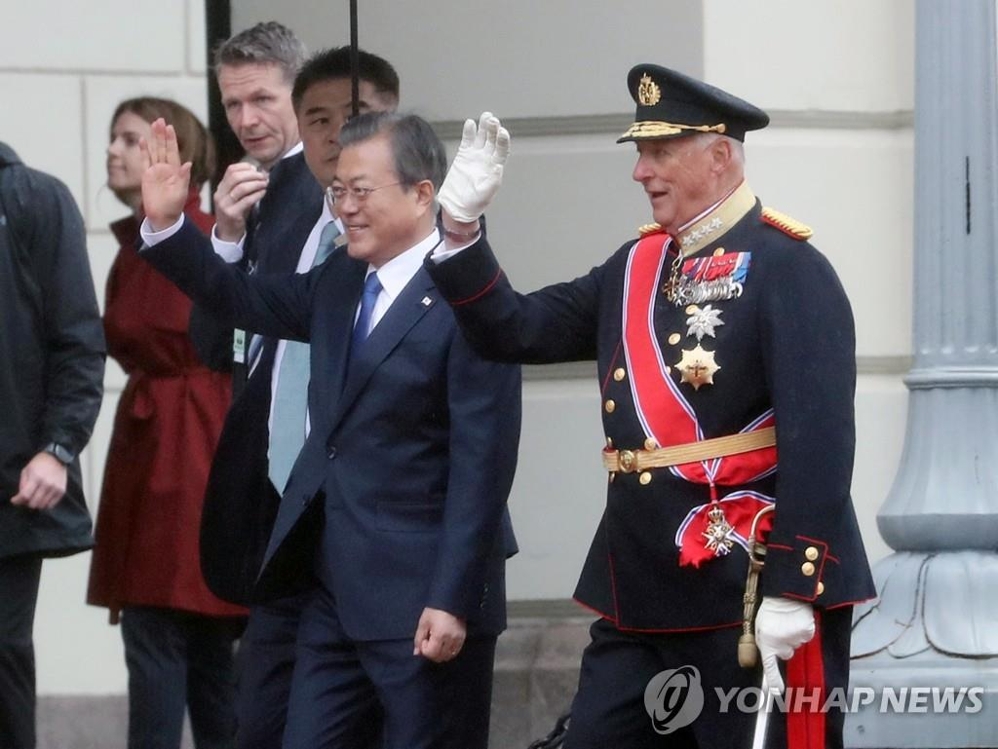 He arrived in Oslo Tuesday evening after a three-day state visit to Finland.

He is the first South Korean president to pay a state visit to Norway, as the two sides commemorate the 60th anniversary of forging bilateral diplomatic ties.

They laid a wreath at a monument for World War II victims and another one to mark Norway's participation in the Korean War at Akershus Fortress. 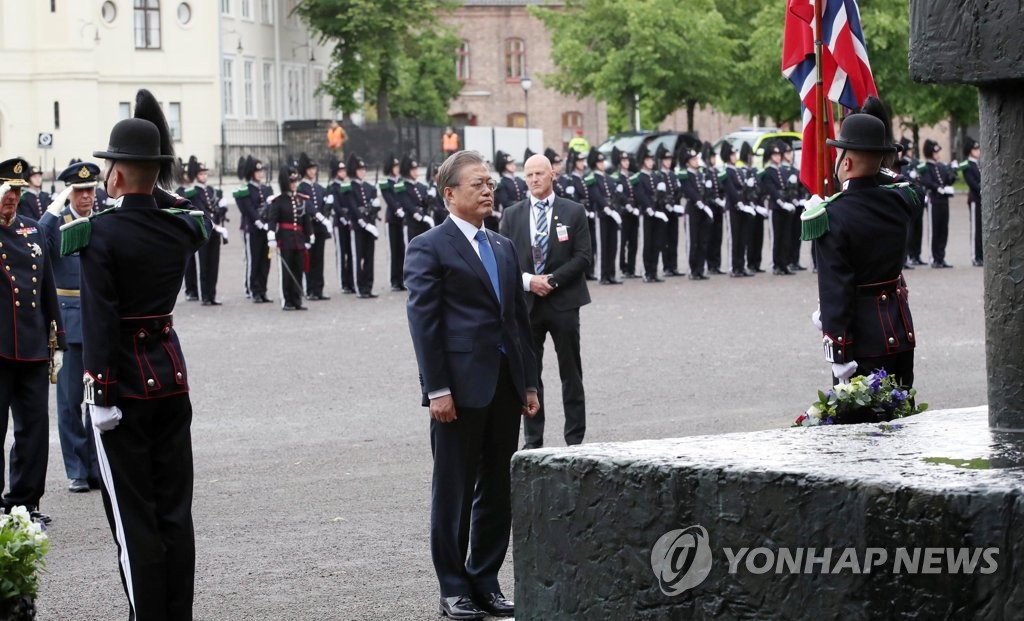 The Nordic nation sent a 623-member medical support team to Korea during the 1950-53 conflict. Operating the Norwegian field hospital known as NORMASH, it provided treatment for more than 90,000 soldiers and civilians.

Moon is slated to head to Sweden on Thursday after traveling to Bergen, Norway's second-largest city, where the home port is located for the navy's 26,000-ton logistics and support ship built by South Korea's Daewoo Shipbuilding & Marine Engineering.