GRENOBLE, France, June 12 (Yonhap) -- South Korea dropped to Nigeria 2-0 for their second straight loss at the FIFA Women's World Cup in France on Wednesday, as their knockout hopes faded further.

South Korean defender Kim Do-yeon had an own goal just before the half-hour mark at Stade des Alpes in Grenoble, and the Taeguk Ladies face an uphill climb to reach the round of 16 for the second straight tournament. Asisat Oshoala had the other goal for Nigeria in the second half.

South Korea, which lost to France 4-0 in the opener last Friday, are in last place in Group A. France and Norway, who had each won their first matches, are scheduled to square off later Wednesday.

The top two teams from each of the six groups and the four best third-place teams will qualify for the round of 16. The first tiebreaker among third-place nations is the goal difference, and South Korea are already minus-6 in that category.

The 14th-ranked South Korea must score a barrage of goals against world No. 12 Norway next Tuesday in Reims, which appears highly unlikely given South Korea's drought over the first two matches.

Both teams were reeling from big losses in their first matches, with Nigeria having been blanked by Norway 3-0 in their opener.

Head coach Yoon Duk-yeo made some lineup changes on Wednesday. Midfielders Lee Min-a and Kang Chae-rim, who came off the bench to provide much-needed offensive spark against France, got the start this time. Yoon went from a 4-2-3-1 formation to a 4-1-4-1 setup. Captain Cho So-hyun was the lone defensive midfielder. Lee and Kang were joined by Ji So-yun and Lee Geum-in on the secondary line of attack behind striker Jung Seol-bin.

South Korea controlled the run of play in the early moments with an almost 7-3 advantage in ball possession. Lee Geum-min tested 18-year-old goalkeeper Chiamaka Nnadozie with a shot in the 18th minute. Five minutes later, Lee teed it up for Lee Min-a for a well-struck shot from outside the box that rolled just wide left of the net. 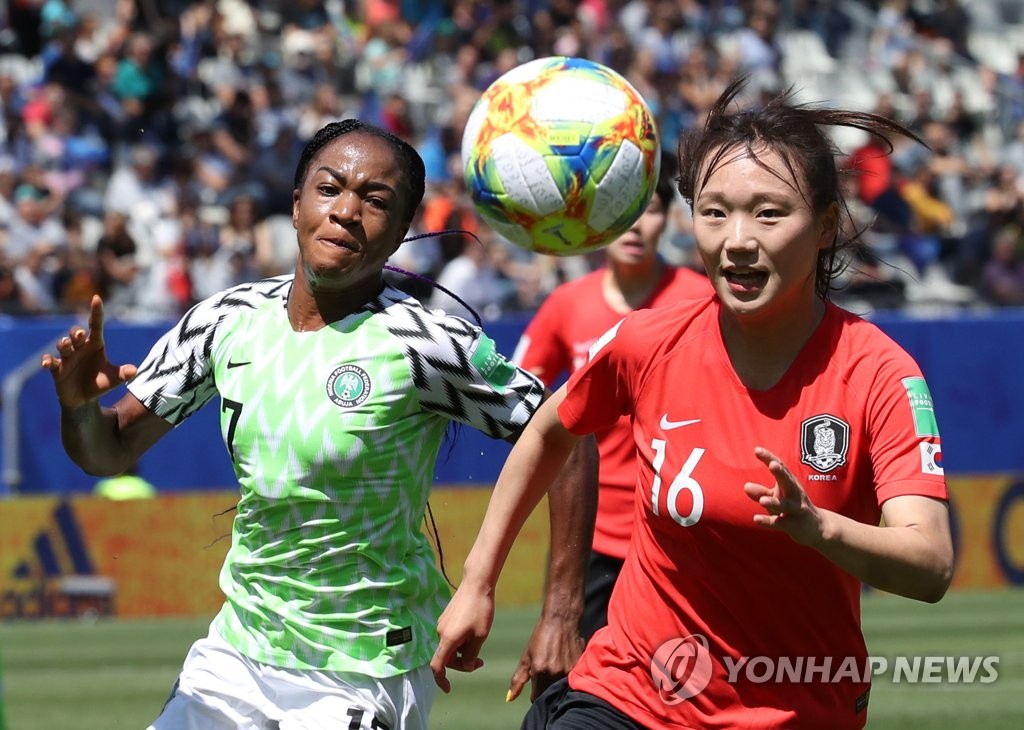 But South Korea conceded the opening goal in the worst possible way in the 29th minute, as defender Kim Do-yeon put one into her own net in an attempt to clear a long punt from Rita Chikwelu intended for Desire Oparanozie.

The goal came under video review for a possible handball, as Oparanozie extended her left arm and appeared to graze the ball with her fingertips. But the original call on the field stood, and South Korea looked rattled in the immediate aftermath as Nigeria ratcheted up their offensive pressure.

South Korea tried to respond in the 39th minute. Lee Min-a headed down a long cross to find Lee Geum-min open right in front of the net, but the midfielder opted to pass and missed everyone.

Oparanozie nearly scored one herself with a 50th-minute header that landed on the top of the netting. South Korean captain Cho So-hyun fired a hard shot right at Nnadozie two minutes later, as South Korea tried to wrest back control.

In another unfortunate turn of events, South Korea had an equalizer called back on an offside in the 58th minute. Nnadozie fumbled a shot by Kang Chae-rim and the rebound went right to Lee Geum-min standing alone in front of the wide open net, but Lee was ruled offside by merely inches when the initial shot was fired.

Nigeria got their insurance goal in the 75th minute thanks to a great individual effort by Asisat Oshoala on a breakaway.

With South Koreans caught deep in the attacking zone, Chidinma Okeke secured the ball in midfield and chipped it forward for the charging Oshoala. In an impressive display of speed, Ohoala beat defender Hwang Bo-ram to the ball and slid it underneath goalkeeper Kim Min-jung.

Two second-half subs, Moon Mi-ra and Yeo Min-ji, each had a great opportunity for South Korea near the end. But Nnadozie put on a goalkeeping clinic to deny Moon on a header in the 84th and stopping Yeo's left-footed shot with a dive two minutes later.

South Korea kept Nigeria on the back of their heels but came up empty-handed. 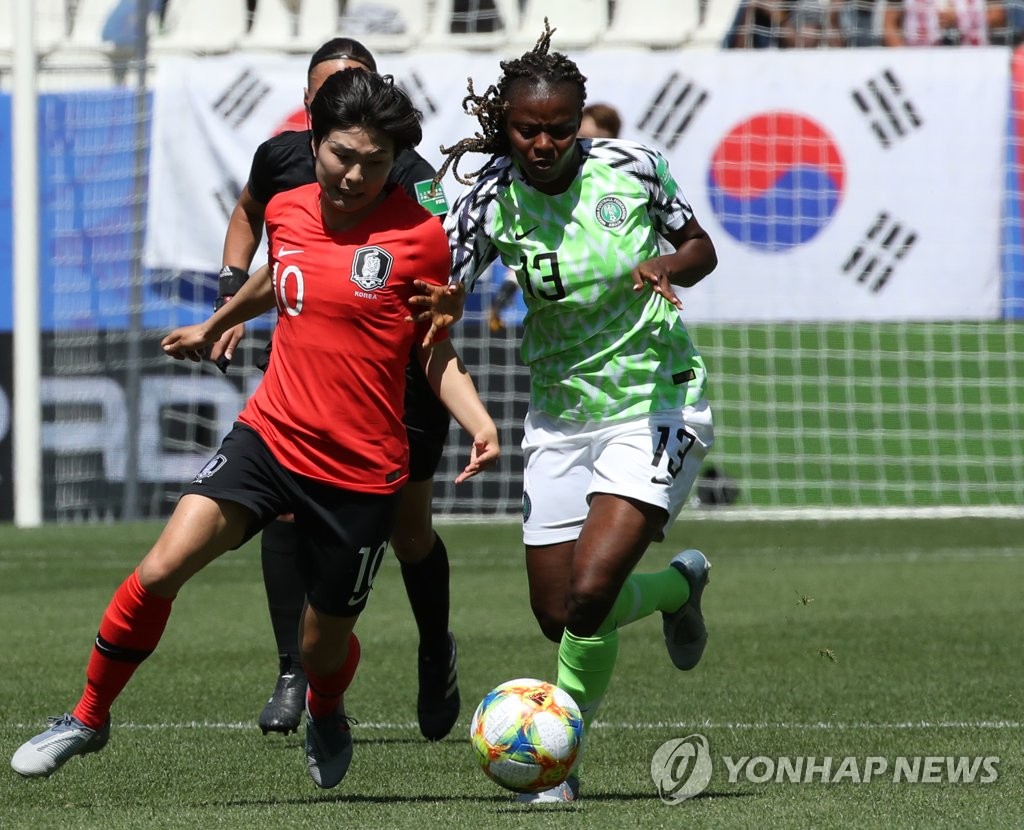