Biegun met with envoys from the 15 Security Council member nations at the U.S. mission to the U.N. and discussed recent developments with North Korea, including this week's letter sent from leader Kim Jong-un to U.S. President Donald Trump, according to sources familiar with the talks.

Also at the meeting were South Korean Ambassador to the U.N. Cho Tae-yul and Japanese Ambassador Koro Bessho.

"We discussed our assessments of the current situation as it pertains to future negotiations (with North Korea) and what direction we should take from now on," Cho told reporters after the meeting.

Biegun declined to share details as he left the site. 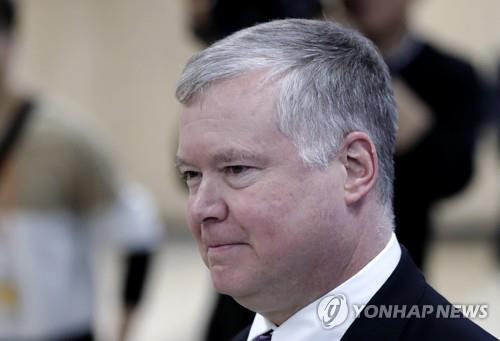 According to one source who attended the talks, the U.S. envoy said he views the recent letter from Kim, as well as his condolence message for former South Korean first lady Lee Hee-ho, as "positive signals."

The outreach from the North came as negotiations between Washington and Pyongyang have stalled following their no-deal summit in February.

The sanctions issue was also raised during Wednesday's meeting. The U.S. has maintained that all sanctions on North Korea must be enforced until the regime denuclearizes.

Wednesday marked one year since the historic first U.S.-North Korea summit in Singapore where Trump and Kim committed to work toward complete denuclearization of the Korean Peninsula in exchange for security guarantees for Pyongyang.