SEOUL, June 13 (Yonhap) -- A flurry of conciliatory feelers from North Korea, as well as the United States and South Korea, is reigniting hopes for the resumption of nuclear talks with the regime, though skepticism still lingers over the prospects of a breakthrough anytime soon.

This week, North Korean leader Kim Jong-un sent a personal letter to U.S. President Donald Trump. He also delivered a condolence message on the passing of the wife of late South Korean President Kim Dae-jung credited with cross-border reconciliation in the early 2000s.

Such moves came as an impasse in negotiations between Washington and Pyongyang, and lackluster progress in inter-Korean exchanges are feared to derail diplomacy for a lasting peace on the peninsula.

"Possibilities for dialogue with the North appear to be opening up as Kim's letter to Trump could lead the U.S. president to write a reply, which would set in motion another round of a letter diplomacy," said Park Won-gon, professor of diplomacy at Handong Global University.

On Tuesday, the eve of the first anniversary of the historic summit between the U.S. and the North in Singapore, Trump said that he received a "beautiful" and "very warm" letter from Kim, the first known correspondence since their no-deal summit in Hanoi in February. 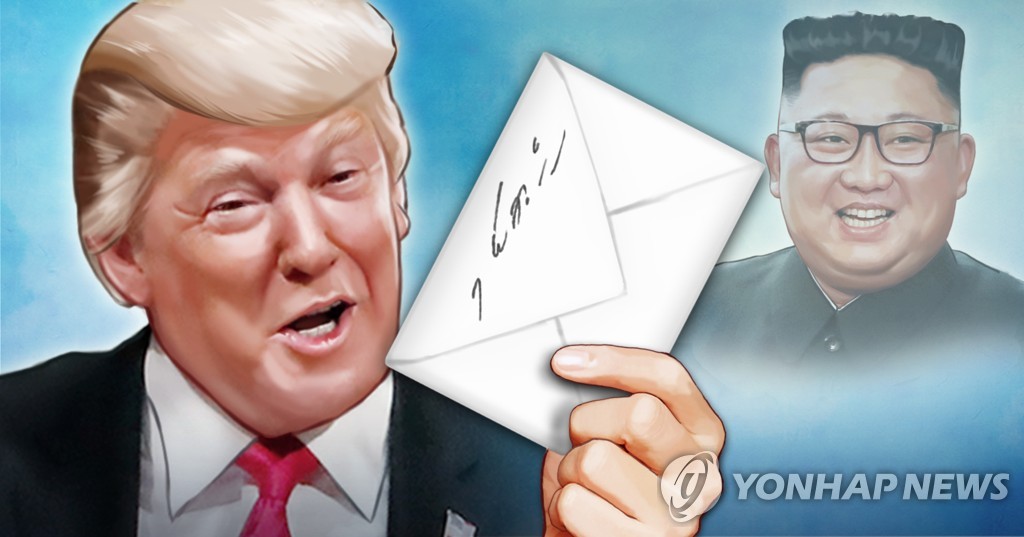 Trump also mentioned the likelihood of another summit with the North Korean leader, though he said he wants to "bring it further down the line" -- in an implicit call for progress in pre-summit denuclearization negotiations.

His hawkish top security adviser, John Bolton, also said that a third summit between Trump and Kim was "entirely possible."

Mindful of an erosion of trust between the U.S. and the North that could derail Seoul's peace drive, South Korea has been stepping up efforts to create fresh momentum for the resumption of talks between Washington and Pyongyang.

Their talks have been stalled since the Hanoi summit where they failed to bridge gaps over the scope of Pyongyang's denuclearization and Washington's sanctions relief.

To facilitate the nuclear negotiations, Seoul has been putting out diplomatic feelers to Pyongyang, most recently through a decision to donate US$8 million to U.N. aid agencies for humanitarian projects in North Korea.

President Moon Jae-in has also voiced his hope for a face-to-face meeting with Kim this month before his planned summit with Trump in Seoul following the Group of 20 summit in Osaka on June 28-29.

"I think it is desirable (for me) to meet State Affairs Commission Chairman Kim before (Trump's visit to Korea) if possible," Moon said after delivering a keynote speech at a forum in Oslo.

But Pyongyang does not appear fully ready for inter-Korean dialogue yet.

On Wednesday, the North only sent a condolence message and flowers over the death of Lee Hee-ho, the wife of former President Kim, contrary to Seoul's expectation that it would dispatch a high-level condolence delegation that could help resume inter-Korean dialogue.

"By sending just a condolence message and flowers, the North hinted that the mood is not yet ripe for cross-border talks," said Koh Yoo-hwan, a professor of North Korean studies at Dongguk University.

"The North may now want the South and the U.S. to meet at their summit this month and craft a deal that is acceptable to the North," he added.

Though Kim's letter to Trump might augur well for the resumption of nuclear talks, it remains uncertain whether the two sides can achieve any significant progress anytime soon considering the absence of nuclear talks since the Hanoi summit.

A key bone of contention is the approach toward the North's denuclearization.

Washington has been pushing for a comprehensive, "big-picture" approach that calls for Pyongyang's substantive denuclearization steps in return for Washington's simultaneous corresponding measures short of sanctions relief. But Pyongyang appears to be sticking to a piecemeal, step-by-step denuclearization process that critics argue is bound to get bogged down.

The U.S. has consistently signaled that it is ready to resume talks with the North to make progress in the enforcement of all commitments that the two sides made in their first summit in Singapore last year .

The commitments include seeking to build new bilateral relations, make joint efforts to build a lasting and stable peace regime on the peninsula and work toward the complete denuclearization of the peninsula.

The North has doggedly called for the U.S. to show flexibility in its hard-line stance after having set the year-end negotiation deadline. But given its economic woes and food shortages, the North could return to dialogue, observers said.

"After the Hanoi summit, the North set the deadline in an apparent fit of anger. ... But due to the internal economic situation and concerns about the erosion of the momentum for dialogue, the North may also feel pressure," Koh of Dongguk University said.

Some analysts pointed to the possibility that a change in the North's negotiation team could influence the future nuclear negotiations.

Following the Hanoi summit, the North's top negotiator, Kim Yong-chol, stepped down as the chief of the United Front Department, while another key negotiator, Choe Son-hui, was seen as cementing her stature. The exact makeup of the North's current team remains unknown.