The combined output of five carmakers here came to 366,152 units last month, according to the data from the Ministry of Trade, Industry and Energy.

The ministry partly attributed the increase to a rise in the number of working days in May to 21 from 20 over the cited period.

Among them, Hyundai Motor's production jumped 12.8 percent on-year to 166,503 units in May, helped by new models, such as its flagship Palisade SUV. 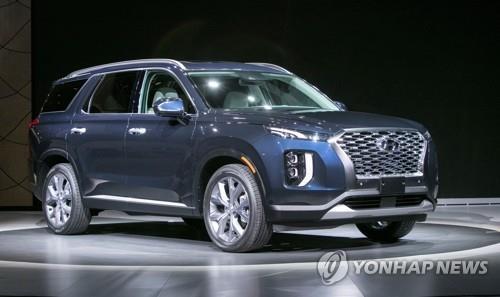 Auto exports came to 226,096 units in May, also up 6.1 percent from a year earlier on the back of robust sales of SUVs and eco-friendly cars.

In terms of value, the country's auto exports climbed 13.6 percent on-year to US$3.95 billion, it said.

Domestic sales of locally produced cars gained 0.5 percent on-year to 132,286 units in May, largely helped by a temporary tax cut on purchases of passenger cars.

In June, the government said it will extend the temporary tax benefit to the end of December this year, from June, in the latest move to boost domestic consumption.

Outbound shipments of auto parts came to $1.95 billion in May, down 7.5 percent from a year earlier, the data showed.