President Moon Jae-in also plans to discuss the issue of peace on the Korean Peninsula with Norwegian Prime Minister Erna Solberg as he wraps up a three-day state visit to the Nordic nation.

This year marks the 60th anniversary of the two countries' establishment of formal diplomatic ties. Moon has noted that their relations date further back -- to the 1950-53 Korean War.

Norway dispatched a 623-member medical support team to Korea and operated a field hospital, known as NORMASH, during the conflict. More than 90,000 soldiers and civilians in Korea received treatment from it.

South Korea and Norway have formed partnerships especially in the shipping industry and hydrogen use.

Moon hopes to deepen such ties and explore closer cooperation in sectors like climate change, air quality and the defense industry.

South Korea has an Arctic research station named Dasan in Norway, and the Scandinavian nation is a role model for the Moon administration's "sustainable welfare state" vision. 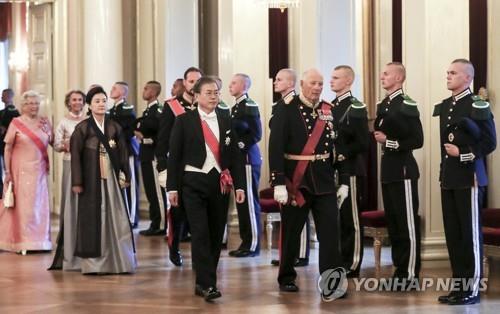 "Norway and South Korea have much in common. They have both overcome limits as 'peninsula countries' through opening up and trade," Moon said.

The king, in response, said a desire for peace has been the basis for the two nations' cooperation since the Korean War.

He recalled the 2018 PyeongChang Winter Olympics, which he said showed that sports can overcome political conflicts and military tensions.

After holding the summit with the prime minister, Moon will head to Bergen, Norway's second-largest city, to inspect a 26,000-ton logistics and support ship of the local Navy that was built by South Korea's Daewoo Shipbuilding & Marine Engineering.

He will then fly to Sweden, the last leg of his eight-day tour of Northern Europe.