SEOUL, June 13 (Yonhap) -- The Joint Chiefs of Staff (JCS) said Thursday it will assess potential impacts of fifth-generation (5G) networks on military operations in the face of mounting worries over related security challenges.

Concerns have arisen that 5G networks could jam military communications and radar operations, particularly after the government announced its plan to supply additional radio frequencies for the next-generation services.

"Currently, the 5G mobile communication and the military's weapons system employ separate frequencies, so we have not seen any impact on our military operations," JCS spokesman Col. Kim Jun-rak told a regular briefing.

"To brace for such chances in the future after the further expansion of 5G services, the military and ministries concerned have agreed to carry out evaluations of possible mutual interference," he added.

The new communication system is designed to offer unparalleled wireless connection speeds, low latency and the ability to connect far more devices without the system being bogged down.

South Korea has steadily expanded its coverage infrastructure, with the total number of subscribers to 5G wireless networks topping the 1 million mark. Earlier this year, the Ministry of Science and ICT said it will secure an additional 2,510 MHz bandwidth for 5G services by 2021.

As part of efforts to assess related cyberthreats and explore ways to beef up defense security, the Defense Security Support Command on Thursday held a forum involving some 1,400 government officials and experts in the field.

Pointing to chances of security lapses that could lead to data leaks and other cyberthreats, Lee Ok-yeon, a professor from Seoul's Kookmin University, called on "the military and public institutions to draw up new security and code systems for the advent of 5G networks."

In his remarks during the forum, Defense Minister Jeong Kyeong-doo stressed the need for "devising preemptive security measures thoroughly" as "the advent of new technologies ... poses diverse security threats which could compromise national security as a whole." 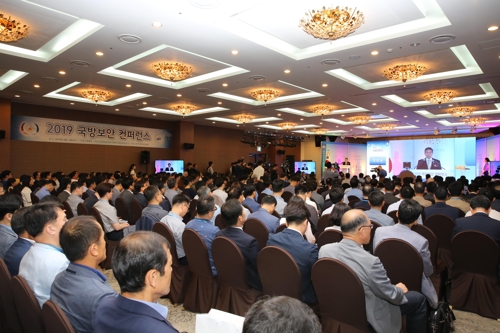 An official at Seoul's foreign ministry said the government will explore ways to shield military communications from any potential security risks associated with the 5G wireless network while respecting the autonomy of private companies.

The United States has repeatedly expressed concerns about the use of Huawei 5G equipment, indicating it could reassess whether to share sensitive information with its allies should their communications networks be rendered vulnerable due to Chinese products.

"Regarding the 5G communications issue, the government will seek ways to avoid any impact on the security of military communications while honoring the autonomy of private firms," the official told reporters on condition of anonymity.

"For this, there have been close consultations among relevant government agencies, and if need be, we will hold consultations with other countries," he added.

The campaign against Huawei came amid an intensifying Sino-U.S. rivalry over trade, technology, maritime security and other fronts, which has put South Korea in an increasingly delicate diplomatic position.