The report released by the Korean Committee for UNICEF said the utilization of paternity leave by employed South Korean fathers is very low due mainly to fears of income reduction.

The report authored by UNICEF's Office of Research is intended to evaluate family-friendly policies of 41 major countries, including OECD members. 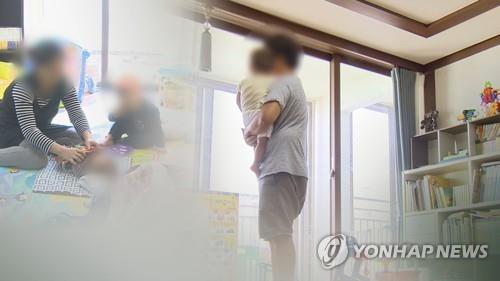 It noted that South Korean men used 17 weeks of paternity leave last year, the second longest among the 41 countries after Japan with 30 weeks.

But fathers made up only 17 percent of all Korean parents who took parental or paternity leave last year, one of the lowest figures among the surveyed countries, it said.

It speculated that reductions in income and workplace competitiveness may be the main factors deterring the utilization of paternity leave, citing 2014 research by the Korean Women's Development Institute that found 41.9 percent of male workers fear income reduction from paternity leave.

Meanwhile, the utilization ratio of child care services for South Korean children aged 3-5 was 94 percent, the seventh-highest figure among the 41 countries, according to the UNICEF report.