SEOUL, June 14 (Yonhap) -- Samsung Electronics Co.'s contract chip making business was expected to grapple with falling revenue in the second quarter due to weak demand and high inventories in line with an industry-wide slump, an industry tracker said Friday.

The global foundry industry was anticipated to post US$15.4 billion won in sales in the April-June period, down 8 percent from a year earlier, according to a report by TrendForce.

The Taiwan-based market researcher attributed the tepid revenue to softening demand and a supply glut, aggravated by a U.S. ban on Huawei, which hurt the Chinese company's sales as well as the global foundry business.

TSMC of Taiwan was predicted to post $7.4 billion in revenue in the second quarter, representing a 4 percent on-year fall, with nearly 50 percent of the market share in the global foundry business.

Samsung was a distant second player, with $2.8 billion over the period, marking a 9 percent on-year decline. But the Korean company's market share stood at 18 percent, which was sharply up from 2016's 7.9 percent, when it took fourth place. 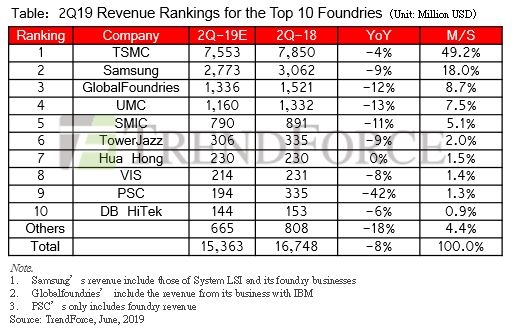 TrendForce predicted Samsung would benefit from Huawei's struggle in the global smartphone market and that the Korean firm's adoption of its own processor for use in its devices could put a dent in TSMC's contract chip supplies.

If Samsung takes over Huawei's share of the European market, TSMC will find it difficult to retake market shares in the smartphone processors through its customers such as Qualcomm and Mediatek, it noted.

"Samsung has a complete network of distribution channels all over the globe, and potentially has the most to gain from this changing global landscape," TrendForce said in a release. "Judging from the smartphone and processor supply chains, Samsung's adoption of its own Exynos processors on its flagship phones will impact TSMC's 7nm processes the most."

Last year, both Samsung and TSMC separately announced that they were ramping up 7nm extreme ultra-violet (EUV) systems to fabricate their finest chips for clients.

The nanometer measurement, which is a key metric in the semiconductor fabrication business, is an indicator of the space between transistors on a chip. The smaller the gap, the more challenging and expensive the chips generally are to develop and deploy, leaving only a few companies able to clinch deals for advanced chips.