(ATTN: ADDS more info throughout; REPLACES photo; CORRECTS no. of films to six in 7th para)

The Seoul Family Court handed down the sentence after Hong applied for a divorce settlement in November 2016 and filed a divorce suit in December that year.

"Hong and his wife's marriage is on the rocks, and yet the primary responsibility goes to Hong. Supreme Court precedent does not allow those who are responsible for a marriage's breakdown to seek divorce," judge Kim Seong-jin said in the verdict.

The director is expected to appeal the ruling.

Hong, 59, began the suit as rumors of his affairs with Kim Min-hee circulated after Hong filmed his 2015 movie "Right Now, Wrong Then" with the 39-year-old actress. In March last year, the two confirmed their extramarital relationship during a press conference for Hong's award-winning "On the Beach at Night Alone."

His wife, identified only as "A," neither responded to settlement procedures nor attended the hearings, which started in December 2017, and no agreement between the two was made. 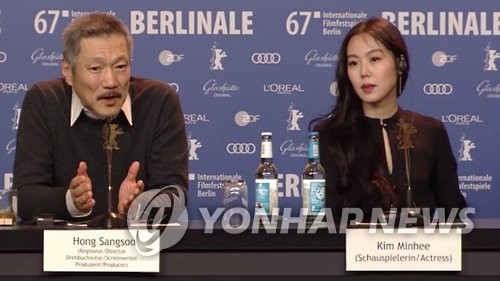 Hong and Kim have filmed six films together. The four others are "Hotel by the River," "The Day After," "Claire's Camera" and "Grass."

"Hotel by the River" (2018) was the 23rd feature from Hong and the director's sixth film starring his lover Kim.

Hong won the Best Director award at the Locarno International Film Festival in Switzerland in 2013 for "Our Sunhi" and the top Golden Leopard award at the same film festival in 2015 for "Right Now, Wrong Then," which also earned its male lead Jung Jae-young the Best Actor prize.

Kim won best actress at the 67th Berlin International Film Festival in 2017 for "On the Beach at Night Alone," becoming the first Korean to clinch the honor at the Berlinale.
(END)