Addressing the Parliament House in the Swedish capital, he pressed Pyongyang to continue dialogue, either bilateral or multilateral, until it wins the trust of the international community.

"Peace can be realized only through peaceful means, which is dialogue. It is dialogue, not nuclear arms, that will keep North Korea secure," Moon said.

He stressed that, "North Korea must substantially show to the international community its commitment to completely dismantling its nuclear weapons and to establishing a peace regime."

The remarks constituted one of Moon's most significant calls in recent months for the communist neighbor to take denuclearization steps. 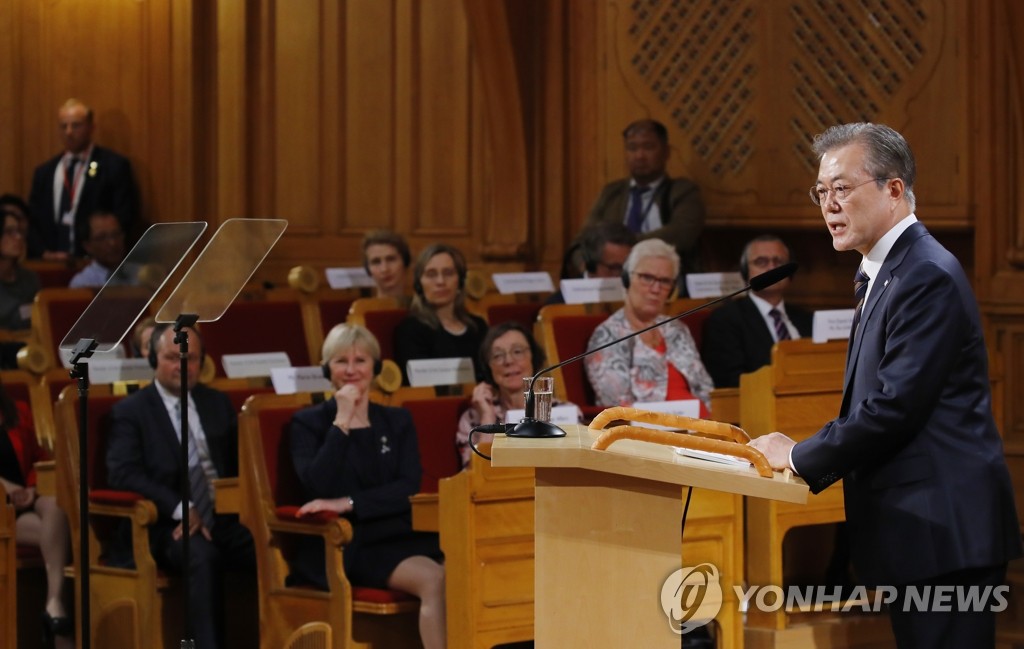 Moon, credited with having initiated summit-driven peace talks through his warm attitude to Pyongyang, is now seeking to broker or facilitate the resumption of Washington-Pyongyang negotiations.

North Korea was not the only target audience of his Stockholm speech, a sort of a sequel to his Oslo Forum speech earlier this week and one in Berlin in July 2017.

He sent an indirect message to Washington, saying, "Each side's political system must be mutually respected and guaranteed."

In case North Korea takes the path of dialogue, he added, nobody would threaten its political system or security, as trust-based dialogue will be the means to resolve every problem.

Apparently mindful of conservatives' criticism of his North Korea policy, the liberal president also delivered a message to South Koreans.

"Trust should be mutual. ... The people of the South must believe in dialogue with the North," he emphasized.

Moon's choice of Sweden as the venue to deliver this message was symbolic and deliberate.

North Korea "shows confidence in Sweden's neutrality and impartiality," according to Moon.

He also cited Sweden's decision to give up its nuclear program, which it began after World War II.

It offers a lesson for North Korea, Moon said, adding that Swedish people had their conviction that the world would choose "prosperity through peace" eventually.