The International Coalition for Religious Freedom in North Korea held its inaugural meeting in central Seoul on Friday, bringing together some 200 activists and Christian advocates.

Among them are Thae Yong-ho, who served as a high-ranking North Korean diplomat based in London before defecting to South Korea in 2016, and Kenneth Bae, a Christian missionary who was detained in North Korea from 2012-2014 on subversion allegations.

Taking responsibility for the task of introducing and fostering religious freedom, the coalition is planning to rally national and international support to the cause.

In a forum held during the inaugural meeting, Thae accused North Korea of "annihilating, not suppressing" religions in the communist country.

"The first step toward inter-Korean reunification should be giving religious freedom to North Korea," he said.

He then proposed building one or two Christian churches in 10 years as a way to realize religious freedom. 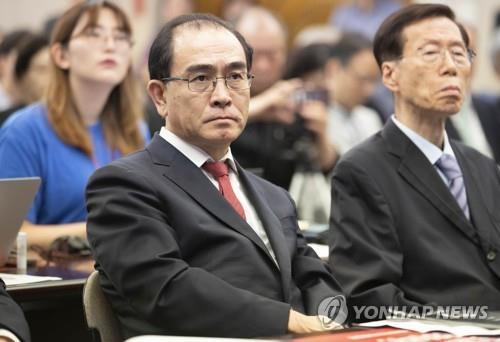