The area around Busan Asiad Auxiliary Stadium, close to the southeastern coastline, was buzzing with BTS fans, famously known as "ARMY," from early in the morning as excited fans arrived at the concert venue far ahead of the first day of the septet's "5th Muster [Magic Shop]" tour performances in Busan.

A range of outdoor events greeted the fans from the morning, including the playing of BTS video clips on outdoor screens, setting a festive tone for the evening show.

The 25,000-seat Busan Asiad Auxiliary Stadium was filled to the brim and heaved with excitement as the seven BTS members took the stage. 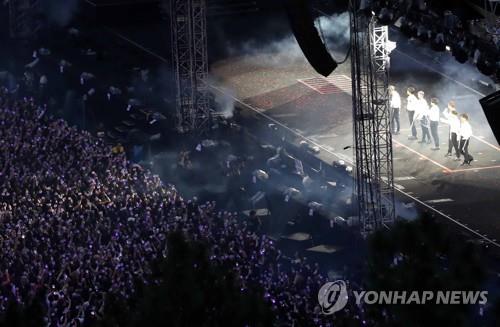 Fans sung along in unison all throughout the show's 150-minute run, and the standing-only show gave the fans nothing but excitement and more energy.

Fans who didn't have tickets still gathered at the concert venue, huddled together in streets or mounted on nearby hills to get a peek through black veils draped around the stadium.

The concert drew many fans from outside of Korea, including those from China, Japan and some Muslim countries, with city officials saying that about 10 percent of the spectators were from abroad.

Maria Gonzalez, a BTS fan from the Philippines, said, "I like BTS because I could feel the passion and sincerity the members have when singing or communicating with fans."

"I am filled with emotions when I listen to BTS songs," she said on the sidelines of the Busan concert.

Tickets for the Saturday-Sunday events sold out as soon as they went on sale, leading to illegal ticket sales at a huge premium on the black market.

Some underage or foreign ticket holders were denied entrance to the concert as their names did not match those registered as ticket buyers, causing a small scene among fans complaining about the rule meant to preclude black-market ticket sales.

As the city hosted the unprecedented global event, an army of traffic police officers and six companies of police forces were deployed across the city to help maintain order around the concert venue.

To greet BTS fans, Busan also devised special events featuring Jimin and Jungkook, who were born and raised here, including retrospective tour courses that walked fans through the Busan neighborhoods where they spent their childhoods.

Following the second day of the Busan concerts on Sunday, the band is moving to the capital to throw the Seoul leg of the "5th Muster [Magic Shop]" tour in the Olympic Gymnastics Arena on June 22-23. 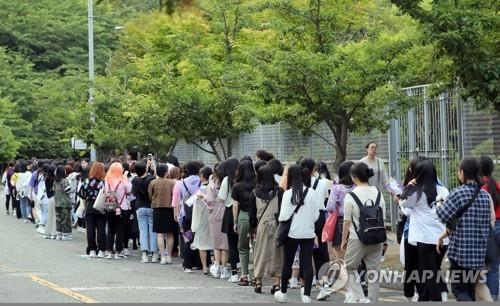 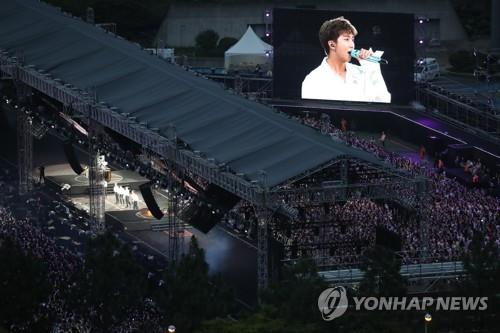