LODZ, Poland, June 16 (Yonhap) -- Though South Korea fell one win shy of winning the FIFA U-20 World Cup in Poland on Saturday, they still beat the odds to even reach the final, thanks in no small part to the leadership of an unheralded coach who demonstrated impressive tactical acumen on the field and developed strong connections with players off the field.

Chung Jung-yong, 50, coached South Korea to their best performance at the biennial youth tournament. They took second place after losing to Ukraine 3-1 at Lodz Stadium in Lodz on Saturday. South Korea had never finished higher than fourth and had never even played in the final of any FIFA men's tournament until Saturday.

This is still a crowning achievement for the no-name coach who has been working in youth football for more than a decade. 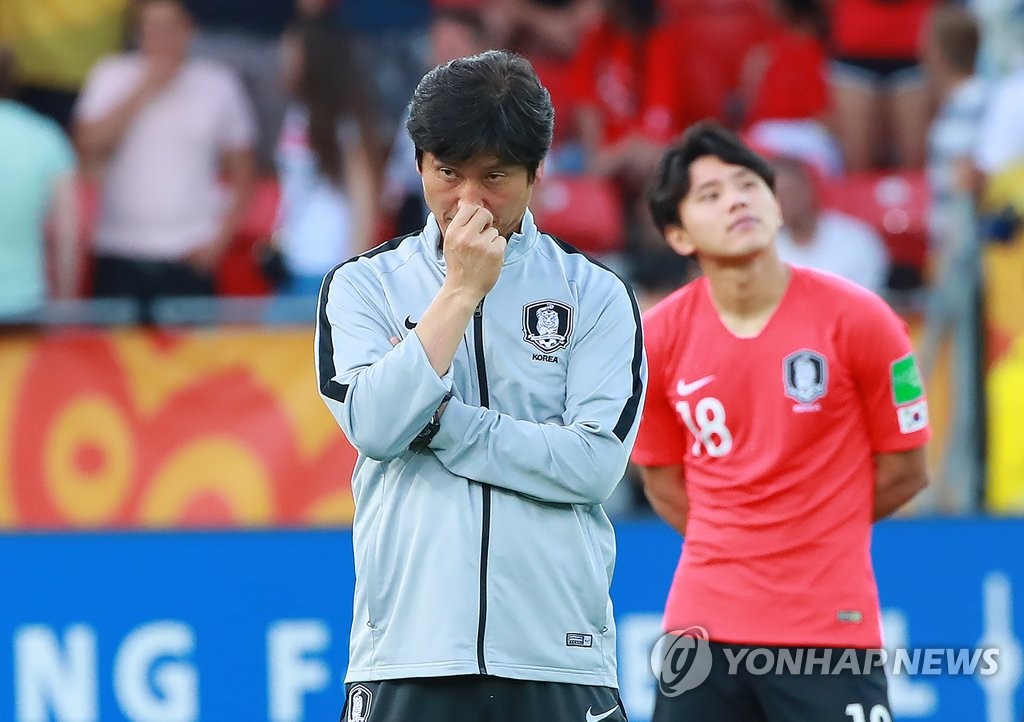 Chung had served as an assistant on the national under-14 and under-18 teams, before taking over the U-20 national team on an interim basis in 2016. He ceded control to Shin Tae-yong ahead of the 2017 U-20 World Cup and then returned as the new full-time boss later. By the time he took over the U-20 team, Chung had already coached the core group of players at previous U-18 tournaments.

That familiarity went both ways, with the players developing a strong understanding of Chung's tactical philosophy.

The unique bond has allowed Chung to put his players in positions to succeed and devise multiple game plans from one match to the next.

Chung has been able to adapt and adjust on the fly depending on matchups, and even when the coach reached deep into his bag of tactics, the players never looked out of their elements. In some instances, South Korea played a passive, defensive-minded game in one half and then switched gears into an attack mode in the next. And the transition was always smooth, which ended up throwing opponents off guard.

That the players responded by winning the tournament is a testament to Chung's ability to get his players to buy into his system, and also to the young players' football intelligence and tactical awareness.

But Chung hasn't been just about X's and O's. Away from the field, he bonded with players using soft leadership, a departure from the my-way-or-the-highway style that was prevalent in the past.

Players said Chung respected their privacy and didn't institute hard and fast rules on what to do or what not to do during their downtime. If anything, Chung has encouraged his young players to spend some time out on the town whenever possible, so that they could decompress and get their minds off football a bit, rather than spend every waking hour thinking about the tournament. 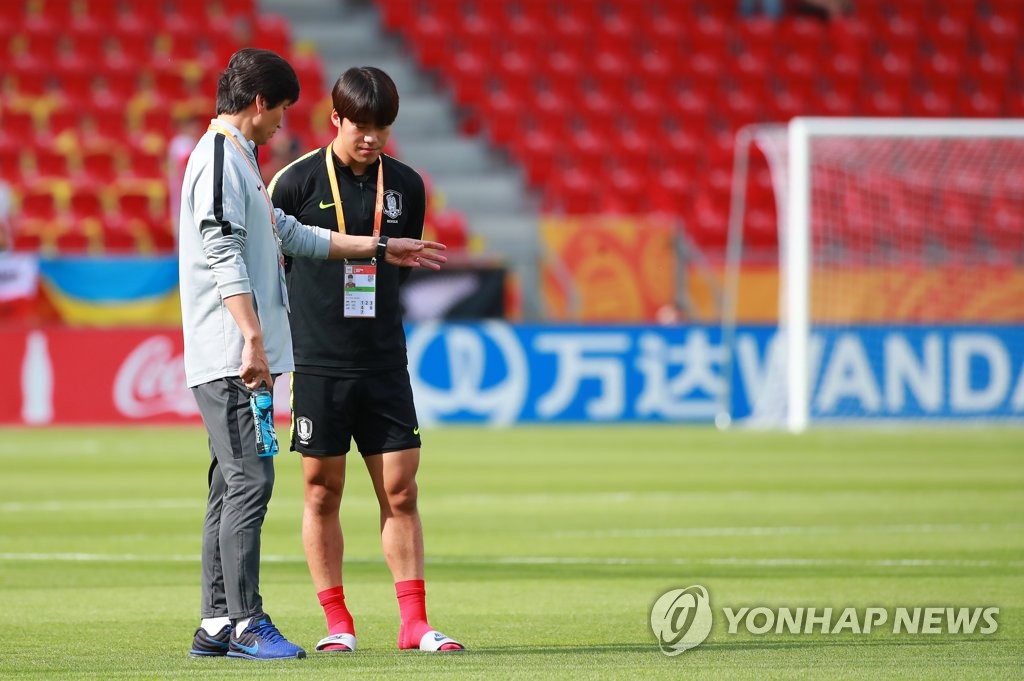 "He takes such great care of us that we want to go out and play hard for our coach," said midfielder Go Jae-hyeon before practice Thursday. "He is like a friendly neighbor. He always has open arms for us."

After South Korea clinched the final berth by beating Ecuador 1-0 in the semifinals, the players doused Chung with water. It was a scene that would have been unimaginable under a different type of coach in the oft-hierarchical sporting culture of South Korea: players pouring water on a coach old enough to be their father.

Chung didn't make much of it afterward, saying his players had earned their right to enjoy the victory, and they always like to have fun without crossing the line.

And fun had been the operative word for this team since the start of the tournament. Chung knew his team was largely viewed as the underdog, and he wanted his players to enjoy the ride, however long it might last. After all, most of these players will be over 20 by the time the next tournament rolls around. Only the few precocious players who make their debut at 18 or younger get to participate in these tournaments more than once.

And from the way they've sung their national anthem in pregame ceremonies with gusto and the way they've celebrated goals, it's been easy to see that these players heeded their coach's advice and were having fun.

South Korea looked like the proverbial team of destiny. They even earned a penalty barely five minutes into the final after a video review.

But it wasn't meant to be, as Ukraine responded with three straight goals. South Korea didn't get the ultimate prize, but no one can fault the players for not trying -- trying to win one for themselves and also for the coach who has been by their side all along.