The wreath was decorated with a black ribbon with golden letters saying, "In memory of the late Lee Hee-ho" and "Kim Jong-un."

A day before the funeral, which took place Friday the wreath was moved to the nearby Kim Dae-jung Presidential Library and Museum.

"The wreath is now in the storage of the Kim Dae-jung Presidential Library and Museum," said an official from the Kim Dae-jung Peace Center, where Lee had served as the chairperson. "We will hold a meeting to decide what to do with it."

One of the options under consideration is to specially treat the flowers to make them artificial ones.

The library also keeps another wreath, which it specially treated, that was given by Kim Jong-il, the late North Korean leader, over the death of Kim Dae-jung in 2009.

"We made that decision to mark the gift from North Korea," said the official from the Kim Dae-jung Peace Center.

Another official from the center said the disposal of a North Korean gift may be a sensitive issue.

"Regarding the inter-Korean relationship, it could cause a conflict if we throw away the North Korean wreath carelessly," he said. 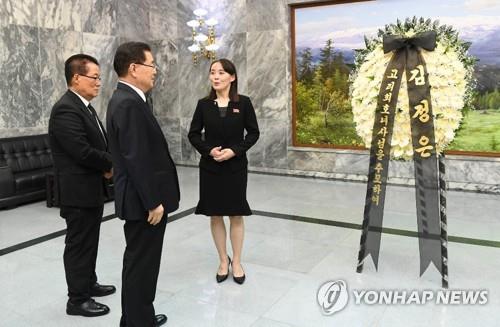