SEOUL, June 16 (Yonhap) -- President Moon Jae-in said Sunday he is proud of South Korea's under-20 World Cup team after they finished in second place with a loss to Ukraine in the final.

"I am proud of our players who greatly enjoyed themselves," Moon said in a Twitter message posted on his way home from a three-nation Nordic trip, after South Korea lost 3-1 to Ukraine in the final at Lodz Stadium in Poland on Saturday.

"The night in South Korea was just as bright as a white night in Stockholm. I also rooted for them on the way back home," Moon said, referring to South Koreans back home watching the game without sleeping even though it was played in the wee hours.

"Ahead of every game, coach Chung Jung-yong asked players to enjoy themselves, and the players fully enjoyed the games," Moon said. "In any situation, they believed in themselves and their colleagues."

Moon said that coach Chung and his players will be remembered as the "greatest team in our hearts."

Moon also said that he hopes the football feat will help comfort those grieving over the deadly sinking of a tourist boat in Hungary that left 26 South Koreans dead or missing. 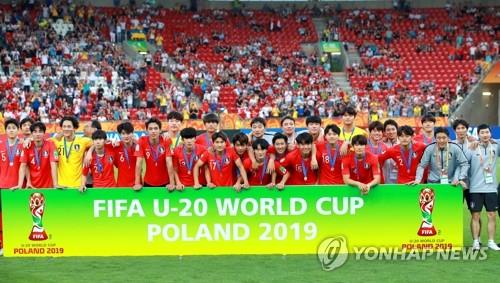