The number of employed males aged between 40 and 49 stood at 3.83 million in May, shedding 115,000 from a year earlier, according to the data by Statistics Korea.

Employment of males in their 40s has kept sliding for 53 consecutive months since January 2015, but the latest figure was the biggest on-year decline since December 1991, when there was a 143,000 reduction.

The government attributed the age group's sluggish performance to the decreasing population, as well as the slumping manufacturing industry in Asia's fourth-largest economy.

"It seems that males in their 40s were the most affected by the tepid manufacturing industry," a Statistics Korea official said. 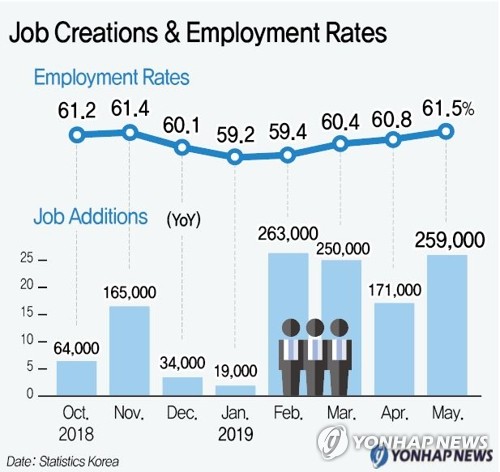 In contrast, the number of female workers increased 198,000 on-year to 22.6 million in May, marking the fastest growth in five years, data showed.

Jobs among those in their 50s and aged over 60 gained the most among all female age groups, partly attributable to the government creating senior jobs in the public sector.

"A growing number of females aged over 60 landed jobs in the public administration, health care and welfare sectors," the official said.

While the number of the employed in their late 20s advanced last month, adding 74,000 jobs for those aged between 25 and 29, many of the jobs were temporary positions in restaurants and other retail sectors, according to the office.

Employment of males in 40s hit most by sluggish manufacturing industry

Employment of males in 40s hit most by sluggish manufacturing industry