The benchmark Singapore complex gross refining margin (GRM) for the second quarter of this year was estimated at $US3.5 per barrel -- a more than 41 percent drop from $6 per barrel a year ago -- according to data from market trackers Platts and Cischem.

Margins are the difference between the total value of petroleum products coming out of an oil refinery and the cost of crude and related services, including transportation. Usually, South Korean refiners generate profit if the refining margin stays above at least $4 per barrel.

The weekly Singapore complex GRM has been below the $4 threshold since the third week of April, meaning local oil companies have not been making profit in the refining business, which accounts for about 70 percent of their total sales.

"Weak demand in the industry caused by the U.S.-China trade dispute and increased supply of oil products following the operation of new facilities in the U.S. and China led to a drop in refining margins" Roh Woo-ho, an analyst at Meritz Securities Co., said.

A drop in oil price also damages the refiners' bottom line as it usually leads to valuation losses in their inventories. The price of a barrel of Dubai crude oil was $60.28 as of Friday, down from the $70 range in April.

SK Innovation Co., the nation's No. 1 refiner, saw its operating income falling 53.5 percent on-year to 331 billion won ($278 million) in the first quarter due to lower margins.

But with the market struggling to improve, analysts expected local refiners' second-quarter earnings to be worse than the first quarter's.

"SK Innovation's second-quarter operating profit is expected to be 7 percent down from the previous quarter," Lee Do-yeon, an analyst at Korea Investment & Securities Co., said. "Growing geographic risks from Iran and the ongoing trade dispute between the U.S. and China are damaging Asian refiners' competitiveness."

Local refiners said that they're also closely monitoring the potential fallout from the recent tanker attacks in the Gulf of Oman, a key waterway for oil transport from the Middle East.

If the situation in the Strait of Hormuz, a crucial shipping route for oil producers in the Gulf region, continues, industry insiders said it would cause a spike in the crude oil price from the Middle East, which would eventually harm refiners' profitability.

"It may be beneficial to our inventory valuation, but rising shipping costs are a bigger problem," a spokesman from a local refiner said. "The best scenario for the industry is to see an increase in demand with the global economy growing."

But some industry observers said cautiously that there could be a slight improvement in refining margin from the second half of the year ahead of tougher International Maritime Organization (IMO) sulfur limits on marine fuel, which come into effect in January 2020.

"The IMO 2020 will push up demand for diesel and marine fuels and will have a positive effect to improve refiners' margins," Won Min-seok, an analyst at HI Investment & Securities Co., said. 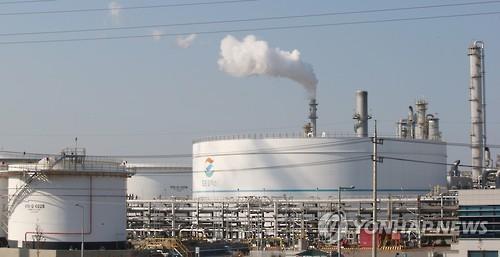