Yang resigned as CEO and chief producer of YG Entertainment last Friday after an informant claimed that he attempted to deter a police probe into a suspected drug purchase by B.I, the songwriting leader of K-pop boy band iKON, in 2016. 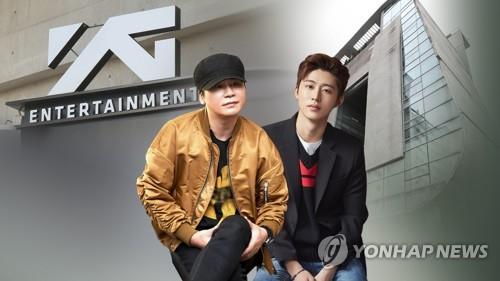 The Gyeonggi Nambu Provincial Police Agency said its investigation team met with an imprisoned trafficker who was convicted of selling drugs to the informant three years ago.

Police questioned the trafficker about whether he knew of a suspected drug purchase by B.I, whose real name is Kim Han-bin, but failed to obtain a meaningful testimony.

They plan to meet with the informant, widely known as a female singer, this week to ask about her complaint filed with the Anti-Corruption and Civil Rights Commission.

The informant was briefly detained and questioned by police in August 2016 on charges of smoking marijuana before admitting to her SNS conversation with Kim about a drug purchase. But she reversed her testimony later, saying the drug was not delivered to Kim and that they had never used drugs together.

At that time, police didn't conduct an investigation into Kim and completed the probe by booking the informant and the trafficker on drug charges.

In her recent complaint to the state commission, however, the informant said she was threatened by Yang to change her testimony one day after her police questioning.

According to the Gyeonggi police agency, the informant returned home Saturday from her trip to Macao before leaving again for Japan on Sunday. Police investigators plan to meet the informant as soon as she returns home.

Police plan to ask her about Kim's suspected drug purchase and Yang's possible exertion of pressure on the police investigation in 2016.

Recently, YG Entertainment, which manages BIGBANG and other big-name singers, has been under fire as many of the celebrities under its management have been embroiled in a series of scandals.