BTS was given the "Global Phenom" award at the 2019 Radio Disney Music Awards held on Sunday in Los Angeles, according to Big Hit Entertainment.

"Global Phenom" is a new prize created this year to recognize the global influence BTS has exerted worldwide in terms of music, fashion and dance, according to Big Hit.

It was the annual music award event's second recognition of BTS -- they garnered four prizes at the 2018 event, including those for Best Duo/Group and Best Dance Track.

BTS wasn't present at this year's event in the U.S., as the band was performing in Busan, South Korea's second-biggest city. But a video showing BTS' reaction to their win was played to the fans at the U.S. music award ceremony, according to the agency. 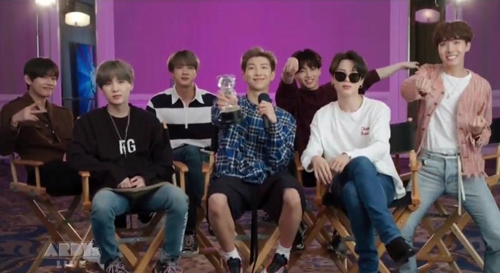