North Korean leader Kim Jong-un has held talks with Xi before and after major diplomatic events, including his first and second summits with U.S. President Donald Trump.

During the Chinese president's state visit to Pyongyang on Thursday and Friday, a new momentum for U.S.-North Korea negotiations could be created.

"As we have seen in the last few China-North Korea summits, they are usually followed by a big diplomatic play thereafter," Harry Kazianis, senior director of Korean studies at the Center for the National Interest, told Yonhap News Agency. "Kim is likely getting a pulse check to see what Xi is thinking and what sorts of outcomes China would back."

U.S.-North Korea negotiations have stalled since their second summit in Vietnam in February ended without an agreement due to differences over the scope of North Korea's denuclearization and sanctions relief from the U.S.

Scott Snyder, senior fellow for Korea studies at the Council on Foreign Relations, held out the possibility of more summits involving the U.S, North Korea and South Korea.

"The timing (of the Xi visit) makes it a precursor to the Moon-Trump summit," he said, referring to Trump's planned talks with South Korean President Moon Jae-in in Seoul at the end of this month. "And North Korea's prior diplomatic template of 2000 and 2018 suggests that a Moon-Kim and/or Trump-Kim summit might follow a Xi-Kim summit."

As North Korea's only major ally and economic benefactor, China has considerable leverage over North Korea. But China's involvement doesn't come without its risks. 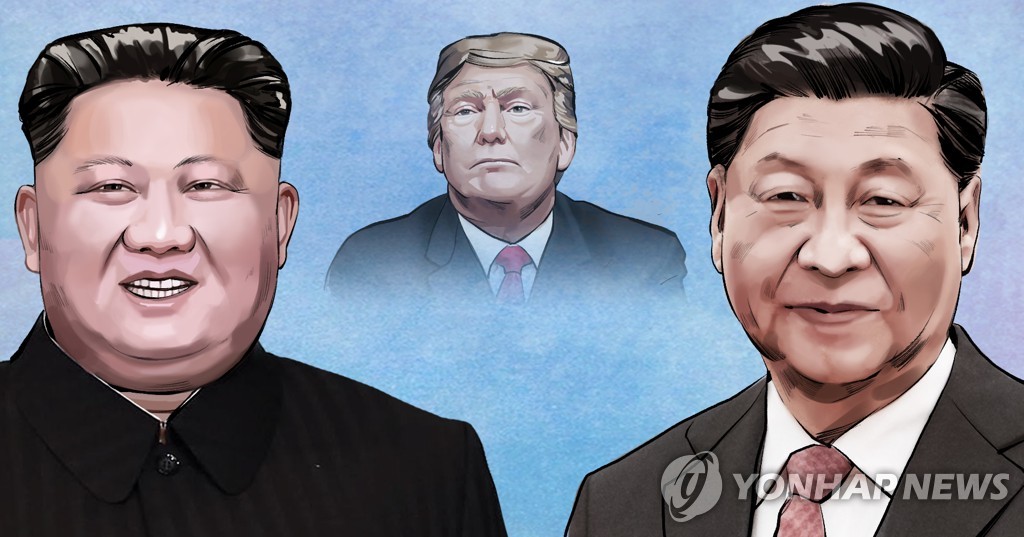 Xi could seek to use that power as a bargaining chip in trade talks with the U.S. when he sits down with Trump at the Group of 20 summit in Osaka, Japan, on June 28 and 29.

The U.S. is at an impasse with both China and North Korea at a time when Trump needs a diplomatic victory going into his 2020 reelection campaign.

"The sad fact is that Washington is completely dependent on Beijing enforcing its so-called maximum pressure strategy as 90 percent or more of North Korea's exports move through China in one way or another," Kazianis said, referring to U.S.-led sanctions on the North.

"If President Xi decided to break America's North Korea strategy, he could do it in just a few weeks by fully opening the border with the Kim regime -- and that should terrify Washington," he said.

The White House and the U.S. State Department insisted Washington and Beijing share the goal of North Korea's denuclearization.

"Our goal is to achieve the final, fully verified denuclearization of the DPRK as agreed to by Chairman Kim," a White House official told Yonhap on background, referring to North Korea by its official name, the Democratic People's Republic of Korea. "The world is focused on Chairman Kim's commitment to denuclearization."

A State Department spokesperson singled out China among the countries concerned.

"The United States, along with our partners and allies, and other permanent members of the U.N. Security Council, including China, are committed to the shared goal of achieving the final, fully verifiable, denuclearization of North Korea," the spokesperson said.

"The United States and the international community have a shared understanding of what final, fully verified denuclearization entails and what meaningful progress toward that goal looks like. We will continue to closely coordinate with allies and partners, and other permanent members of the U.N. Security Council, including China," he added.

Short of any major concessions from Beijing, Kim could still benefit from a Xi summit by moving bilateral relations closer.

In his New Year's Day address this year, the North Korean leader warned that his country may be "compelled to find a new way" to defend its sovereignty and interests if the U.S. does not keep its "promise" and maintains sanctions and pressure on the regime.

Many interpreted the remark as a veiled threat to move closer to Beijing.

"I don't think it is mere coincidence," Robert Manning, senior fellow at the Atlantic Council, said of the timing of the Xi visit. "Xi is symbolically making a statement of the importance of China's role in the Korean equation, highlighting China's growing regional and global role, and perhaps hinting at the alternative Kim suggested not long ago."

Xi could use his meeting with Kim to warn the young leader against any further nuclear or long-range missile tests, or suggest a path forward for U.S.-North Korea negotiations and then convey it to Trump, Manning said.

"Xi might argue that Kim should wait out Trump to 2020 and deal with the next U.S. president," he added. "But I would be surprised, as Kim is very unlikely to find another U.S. president willing to play these bromance games."